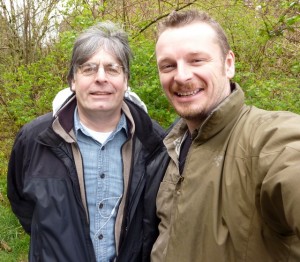 Earlier this month Steve Scher, host of the popular NPR-KUOW radio show ‘Weekday’ joined me in the field to talk bears. Steve was piecing together a story about the bears of Washington and wanted an opportunity to learn about some of the work GBOP and our partners do on the ground. We met at Tradition Lake near Issaquah and within minutes I was able to show him some fresh bear sign! A beautiful example of a tree stump destroyed by a black bear that was searching for grubs. This forest is a great example of the quality habitat that can be found on the outskirts of a sizeable town like Issaquah, and where conflicts between bears and people can occur. These conflicts usually revolve around non-natural food attractants. A bear in a backyard is just like a dog begging at the dinner table – one reward and he’ll be back for more. The trouble is, once a bear is “food-conditioned” by tasting high-calorie foods like garbage, sunflower seeds, and compost, it is a hard habit to break. As we scoured the forest for bear clues I shared some of these thoughts with Steve who enthusiastically recorded them for his show. 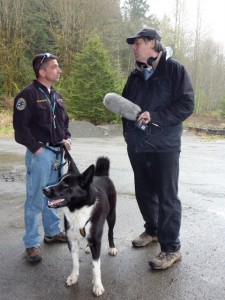 I was excited about Steve’s approach as he was really trying to assess the future of grizzly bears and other large carnivores in Washington State. With fewer than 20 grizzly bears in the North Cascades, their future does not look bright without human intervention (an augmentation of bears from another area would be needed). In contrast, in 2008 wolves made a natural return to the Cascades for the first time in 80 years, and given half a chance, their numbers will increase along with their range. Black bears are doing pretty well in the forested ecosystems of Washington – estimates suggest there are around 20,000 in our state.

What’s good for black bears is good for grizzly bears too, and with that in mind GBOP is always thinking about pragmatic ways for humans and bears to coexist. One of the programs we love is the work of Rich Beausoleil and Bruce Richards, both of whom are carnivore biologists with Washington Department of Fish and Wildlife. They are on the frontline of working with bears and people to ensure safety and understanding – for both species! They use Karelian bear dogs to help keep black bears (and cougars) from getting into trouble near human property. This incredible approach to wildlife management is quite something to witness so I introduced Steve to Rich and Bruce that same afternoon. He recorded the sound of a bear being released from a culvert trap with the specially trained Karelian bear dogs in hot pursuit. The recording on the radio sounds pretty dramatic to say the least, but it is all in the bear’s best interest. Instead of capturing a bear at the location where it has gotten into trouble and translocating it (only to find it later return) the new approach (made possible by the use of these dogs) is to release the bear actually right there – in the very place it is finding itself in trouble. Once the culvert trap door opens, the bear bolts out, and the crazy commotion of noise and dogs ensures that the bear will not be back for more! “Tough love” as Rich says. But it works. Steve got a real kick out of meeting Cash and Mishka, the two dogs owned by Rich and Bruce. They are among the best wildlife ambassadors out there.

Next stop was an interview with Cathy Macchio, an incredible lady who has taken it upon herself to arm her neighborhood in the Issaquah Highlands with all the information needed to live peacefully in bear habitat. She has worked tirelessly to help bears and people and we are honored to now welcome Cathy to the GBOP team.

On Monday, Steve invited Rich, Scott Fitkin (US Forest Service wildlife biologist) and myself back to the studio for a live show about bears, cougars and wolves. The show became a great overview of Washington’s carnivore heritage. You can hear the podcast here: http://www.kuow.org/program.php?id=20076

Our thanks to Steve Scher and everyone at NPR-KUOW for supporting our work by helping to spread the word!