The cougar is the second largest member of the cat family in the western hemisphere (the jaguar is the largest) and the largest of the North American wild cats. On average, adult male cougars stand about 30 inches at the shoulders, are about 7 to 8 feet long from nose to the tip of their tail (the tail is about 1/3 of that length), and weigh about 120 to 160 pounds. Large males can reach up to 180 pounds but that is very uncommon. Adult female cougars are usually about 25% smaller than male cougars (about 85 to 110 pounds).

Cougars can be identified by two primary characteristics: the pelage or coat of adult cougars is uniformly colored tawny, grey-brown or red-brown, and a very thick and long black-tipped tail which measures about half of their body length. The tail serves to counter-balance the cougar’s movements as they pursue prey and travel across the landscape. 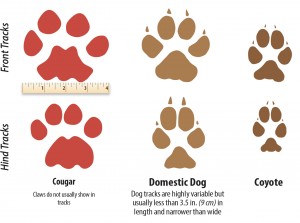 Cougar tracks show four toes on both the front and hind paws, and an M-shaped heel pad with two lobes at the top or leading edge, and three lobes at the base. Their retractable claws do not show in their prints except on slippery or difficult terrain where they need more traction or during a prey pursuit. A cougar carries its heavy tail in a wide U-shape at a normal walk, and in snow, the lower portion of its tail can leave drag marks between each print.

Note: When observing tracks it is important to recognize that several factors may lead to incorrect conclusions about the gender of the animal making the track.

Cougar scat is dense and segmented, with rounded ends that may or not have small “tails”. Each segment is roughly 1 to 1 1/2 inches in diameter. Cougar scat is roughly the size of those of a large dog, which distinguishes it from the similar but smaller scat of bobcats and lynx. Hair, bones and teeth commonly appear in cougar scat. Vegetation is usually not present in cougar scat but some may contain grass. Cougars leave scat near scrapes, along trails, in arroyos, under overhangs, in caves, and near kills. It is important to note that it may be difficult to tell the difference between the scat of a cougar and that of a large coyote or dog. Also, smaller cougars may deposit scats similar in size to those left by bobcats. For these reasons it may be necessary to perform DNA analysis to determine positively whether a scat is that of a cougar or another animal.

Male cougars frequently make scrapes as markers for other cougars leaving them in conspicuous places along trails, at junctions, in canyons, in caves, and along ridge lines. Male cougars make scrapes by using their hind feet to push up a mound of pine needles, leaves, dirt and debris. Occasionally, cougars will urinate or defecate on the scrape. Female cougars rarely make scrapes.

After killing large prey, cougars will first eat the organs and part of the meat, and then drag the prey a distance. They will then cover the remainder with leaves, pine needles and other debris to hide it from other animals.  The cougars may spend three to five days feeding on the prey so may not be far from the kill site.