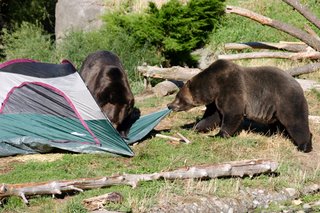 Recently the staff hosted a bear awareness weekend and invited GBOP to participate. Visitors to the zoo are always fascinated by the bears. With them as the focus it was easy to interest people in learning about the history, biology and recovery efforts of Grizzly Bears in the lower 48 states. Only about 1000 bears are left where once roamed up to 100,000.

Denali and Kima had their role in the bear awareness program. They were given the job of teaching the public how to set up a safe camp in the back country that will not attract bears and create bear-human conflicts. Their method of education? Set up an unsafe campsite and show the public what happens next. With the help of REI, who donated camp equipment, the Zoo staff set up a camp right in the middle of the bear exhibit. Food was left in the tent. Supplies were not hung correctly in a tree. A cooler was set out full of leftovers. The tent was pitched next to the cooking fire.

The bears, who were not present during the set up, were let loose to have at it. In less than 20 minutes the camp was completely destroyed and the bears had a free meal. Bears are incredibly intelligent and curious. Once they learn how to get an easy meal, the next camper that comes along is an easy target. REI will not be using that camp equipment again.

The next task was to give the bears a Bear Resistant Food Container (BRFC) full of goodies that the bears would want. To the delight of the 900 pound bears the containers were resistant, but not bear proof. Soon the bears were enjoying a tasty snack. The crowd went wild when the BRFC broke open. Denali and Kima made everyone think about how to set up a safe camp in bear country.