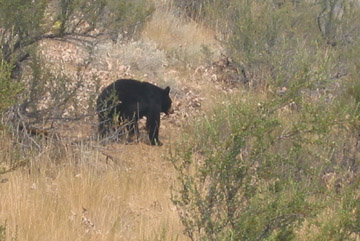 As I look out my window at the first snowfall of the year, I wonder where my summer friend has chosen to spend the next five months sleeping. Our property borders the Okanogan National Forest and was home to this bear throughout the spring, summer and into early fall.

We coexisted quite easily by respecting each other’s space. The terrain is shrub-steppe. There is plenty of food for the bear including lots of succulent plants and grasses, grubs and insects, apple orchards, huckleberries and service berries. Both the hard winter and the coyotes left plenty of winter killed deer carcasses for the bear to replenish nutrients during the first few weeks after the bear emerged from the den.

I keep a tidy house so that compost, pet food, bird food and garbage does not attract the bear and create a conflict situation. My dogs have also been trained not to chase deer or bears. Alas, they do occasionally go after a chipmunk.

Throughout the season the bear and I ran into each other. My wife and I spend a lot of time riding horses and walking dogs on the forest service land. Usually the dogs or the horses would ‘alert’ to the bear before we were aware of its presence. That’s a handy tip to keep in mind when you walk in the woods. By watching the body language of your pets, they will alert you to the presence of other animals and people nearby. My Australian Cattle Dog has a special bark that he only uses for bears. I snapped this photo of the bear after I noticed my horse looking intensely up the hill as the bear worked it’s way down the slope behind our house.

When I see the bear I wave slowly and say “Hi Bear” loudly. This lets the bear know that I am human. Usually, the bear stands up to get a good look at me. We both go about our business giving each other plenty of space.