Last week my friend Linda who lives in Sammamish, Washington told me her neighbors down the block saw a couple of bears searching for food. The Kennedy’s backyard backs up to a ravine and every spring they see evidence of bears. It was Tuesday night at around 10 p.m. when they heard some noises in their backyard. When they looked out the window they saw a sow and a juvenile heading towards the bird feeder. The Kennedy’s said they should have taken the feeder down but thought there was more time before the bears would be out. Lesson learned! 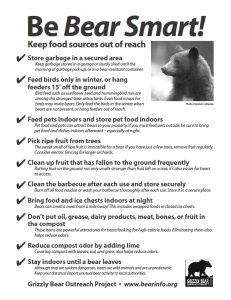 The good news is that Linda took action. She posted the GBOP’s bear smart checklist on neighborhood mailboxes and handed out a few bear safe brochures to her neighbors who wanted to learn more about how to be bear safe.

Most people don’t realize that bears have an exceptional sense of smell – seven times greater than a hound. It has been documented that a bear’s sense of smell is so acute that they can smell bird seed from a mile away.

As a community member of Issaquah Highlands and the GBOP field representative for the I90 corridor, I am grateful that Linda took initiative to help get the word out to her neighbors about simple steps they can take to be bear safe. It takes a community working together to build safe neighborhoods for people and bears.

If you live in bear country, you too can take these simple steps in your neighborhood to keep bears safe and avoid human/bear encounters.

For more information on staying safe while living, working and recreating in bear country you can visit GBOP’s website at www.bearinfo.org