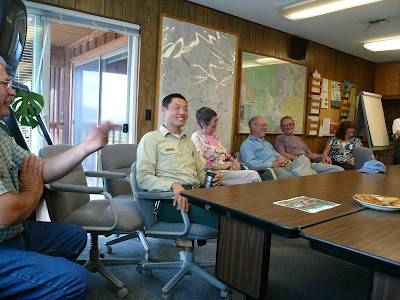 Michael Liu hosted an open house for the public at the Winthrop ranger station. He is the new district manager and has 27 years experience with the USFS. Previous postings included Idaho, Montana, California, Colorado and New York. He has seen it all and been exposed to many of the same issues that will require attention in the Okanogan area.

Local stakeholders stopped by to say hello, chat and ask questions. Folks representing the town of Winthrop, logging, snowmobiling, back country horsemen and conservationists were in the mix.

Mike took all questions and responded thoughtfully. For someone who has been on board for only a short time he has taken in a lot about the local issues and the resources that are available to the district. Impressions were he will attempt to strike a balance with issues that tend to be polarizing such as the local wolf pack and controlled burning policies.

Everyone welcomed Mike to the Methow.