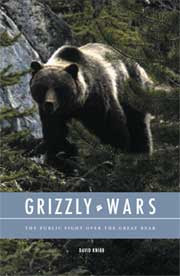 What does one do to save from extinction a creature as cantankerous and controversial as the grizzly bear? Do grizzlies still live in the North Cascades and what will it take to prevent them from dying out?

Grizzly Wars: The Public Fight Over the Great Bear, slated for publication in early October, examines these and many other questions about the contentious effort to recover grizzly bears in the Cascades and Northern Rockies, where they have been listed under the Endangered Species Act for more than 30 years.

Author David Knibb, a naturalist, lawyer, and author, shuns the role of an advocate to explain the issues. He uses the North Cascades to illustrate many of them — how recovery areas were picked, states rights, rural and urban conflicts, hiker anxieties, genetic concerns caused by isolation, minimum viable populations, and issues about moving bears from one area to another.

From the Cascades the book broadens to look at national wildlife politics and the five other recovery areas in the Northern Rockies. Knibb examines the key issues in each, including the debate over last year’s decision to remove Yellowstone’s grizzlies from the list of threatened species. In the process he discusses the critical role of states, the need for links between recovery areas, distinct populations, and cooperation with Canada on bears along the border.

In a separate chapter devoted to Canada, Knibb reviews the status and challenges facing grizzlies in British Columbia and Alberta.

In a foreword, Lance Craighead praises Knibb for reporting on such a controversial topic in a “careful and admirably unbiased” way. The book also earns praise from Doug Peacock, noted bear advocate, Brock Evans, president of the Endangered Species Coalition, and others.

For more description, see the publisher’s catalog at: http://ewupress.ewu.edu/nonfiction/Grizzlywars.htm.

After mid-October Grizzly Wars will be available in bookstores, or you can order it from Eastern Washington University Press at: http://ewupress.ewu.edu/howtoorder.htm