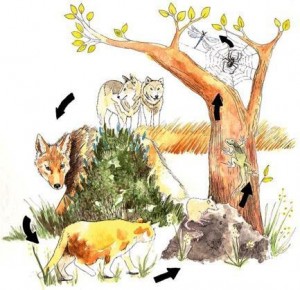 The catastrophic decline around the world of “apex” predators such as wolves, cougars, lions or sharks has led to a huge increase in smaller “mesopredators” that are causing major economic and ecological disruptions, a new study concludes.

The findings, published October 1 in the journal Bioscience, found that in North America all of the largest terrestrial predators have been in decline during the past 200 years while the ranges of 60 percent of mesopredators have expanded. The problem is global, growing and severe, scientists say, with few solutions in sight.

An example: in parts of Sub-Saharan Africa, lion and leopard populations have been decimated, allowing a surge in the “mesopredator” population next down the line, baboons. In some cases children are now being kept home from school to guard family gardens from brazen packs of crop-raiding baboons.

In case after case around the world, the researchers said, primary predators such as wolves, lions or sharks have been dramatically reduced if not eliminated, usually on purpose and sometimes by forces such as habitat disruption, hunting or fishing. Many times this has been viewed positively by humans, fearful of personal attack, loss of livestock or other concerns. But the new picture that’s emerging is a range of problems, including ecosystem and economic disruption that may dwarf any problems presented by the original primary predators.

The elimination of wolves is often favored by ranchers, for instance, who fear attacks on their livestock. However, that has led to a huge surge in the number of coyotes, a “mesopredator” once kept in check by the wolves. The coyotes attack pronghorn antelope and domestic sheep, and attempts to control them have been hugely expensive, costing hundreds of millions of dollars.

The problems are not confined to terrestrial ecosystems. Sharks, for instance, are in serious decline due to overfishing. In some places that has led to an explosion in the populations of rays, which in turn caused the collapse of a bay scallop fishery and both ecological an economic losses.