Many people have seen bear scat; whether it is in pictures, at a zoo or in the wild, it is usually very apparent what the bear had been eating. So how does the food get from one end of the bear to the other? 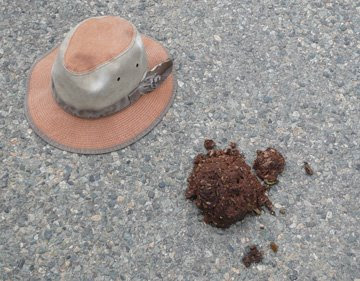 The teeth start the breakdown process of the food the bear eats. They use their teeth to hold, tear and grind food before swallowing it.

Bears have 42 teeth, except for the sloth bear that only has 40. Humans have 32 teeth.

Bears are omnivores that have relatively unspecialized digestive systems similar to those of carnivores. The primary difference is that bears have an elongated digestive tract; an adaptation that allows bears more efficient digestion of vegetation than other carnivores (Herrero 1985). Unlike ruminants, bears do not have a cecum and can only poorly digest the structural components of plants (Mealey 1975). To compensate for inefficient digestion of cellulose, bears maximize the quality of vegetal food items ingested, typically foraging for plants in phenological stages of highest nutrient availability and digestibility (Herrero 1985).

It is thought that the barrel shape of the bear’s body is an indication of a long intestine. Brown bears do have a longer intestinal length than that of a black bear. 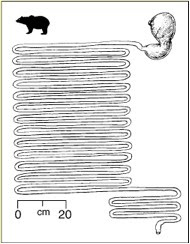 Different foods take varying amounts of time to pass through the body. Meat takes about 13 hours while clover takes about 7 hours (Pritchard and Robbins, 1990). Berry seeds pass through unbroken and are able to geminate making bear’s great seed dispersers. Nutrients are also put back into the environment as the feces break down.

These are just two reasons bears are very important to the health of the environment.