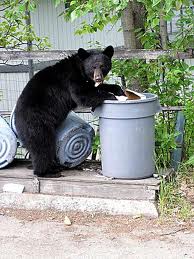 Most of us love watching bears, up to a certain point. We love to watch the cute black bear cubs who visit our fruit orchard and forage for the fallen fruit.  We laugh watching the antics of the young bear trying to climb a pole to reach a bird feeder, or even the comical bear who goes dumpster-diving for the high calorie food thrown out as last night’s dinner remains. We tolerate and occasionally even encourage this type of behavior as the camera roles. So for a while we are entertained by this bear behavior; but way to often,  these type of stories do not have happy endings. Its the part you don’t see after the YouTube clip is over.  Its the part where the “fed bear becomes a dead bear”.

Wild carnivores, including black bears and grizzly bears, have a deep innate fear and distrust of humans and the places we live and occupy. They naturally and instinctively avoid such places. They will even go way out of their way to do so. But bears are driven primarily by one very strong instinct that tends to over rule the others. They must eat; many thousands of calories every day to survive and make it through the denning season with sufficient body fat to wake up the following spring. Females with insufficient fat stores when they enter their dens, will not give birth to cubs, or if they do, the cubs will not survive because she won’t be able to feed them. For bears, the search for high-calorie food sources is relentless. Bears are also highly intelligent in the methods they employ in their search for food. They are great problem solvers and will spend the time it takes to figure out how to get into a garbage can left out over night  or how to reach a bird feeder hanging over their heads but stocked with calorie-rich suet or black sunflower seeds.

The tragedy is that bears that feed on human-provided food often lose their fear of humans. They lose their fear of the dogs that live with humans. They just want to eat, and they don’t want to leave their life-giving free food source. They begin to hang around homes/yards/businesses more often anticipating the arrival of food. Other bears  may join them. Now the neighborhood has a problem:  bears that refuse to leave, bears that may stand their ground when humans yell and throw things. After all,  they have been hanging around for a while and have watched the neighborhood. They know that humans play games and yell and throw things and it normally doesn’t pose a threat to them. What bears at this critical point in time cannot know, for all their intelligence, is that they have worn out their welcome, and the rules of the game have changed.

A mother becomes worries for her children, a hobby farmer for his chickens, and some one calls the authorities. They arrive and agree that the bear has become “a problem bear” habituated to humans and the bear must go. For a few, that may mean the bear will be relocated up in the forest far away from homes. Some law/wildlife enforcement agencies have the ability and resources to use non-lethal deterrents like cracker shells and bear dogs. At the Grizzly Bear Outreach Project we are proud of our partnership with the Washington Department of Fish and Wildlife and applaud them for their innovative work in this area,  especially the highly-successful Karelian bear dog program. But for many unfortunate bears, its the end of the food chain,  the end of the line.  They will be shot. We tell the kids “the nice policeman had to shoot the “bad” bear so that he wouldn’t hurt anyone”.  But the bear isn’t a “bad” bear.  He was doing what bears must do to survive. Looking for high-calorie, easily obtainable food where  there is little competition. Its what bears do.

So please, in this season of back-yard barbecues and salmon bakes, of camping trips and hikes in the woods, don’t feed the bears. Keep all bird feeders way out of reach.  Make sure you clean up any food or barbecue residue. Use bear-safe storage containers when back-packing, hang your food, don’t cook near your tent or when car camping, put your food in your vehicle. Store all pet food in containers  where odors can’t escape to entice a bear, and put the pet or livestock food inside a sturdy building. Clean up fallen orchard fruit daily. Keep your garbage inside until the morning of pick up day. If you live in an area where bears have been seen or known to feed,  make sure any garbage put out is in a bear-safe waste container.  Don’t give a bear a reason to stop in your yard.

As more and more of us move out into territory where bears live, we will have bears for neighbors. They may even pass by occasionally. People and bears can easily and safely co-exist as long as bears are not fed by humans. For many more tips on how to avoid human/bear conflicts and how to keep you, your family AND the bears safe,  visit our “Tips for Co-existence Page.”