Why are Polar Bears falling through the sea ice? Scientists have found the first unequivocal evidence that the Arctic region is warming at a faster rate than the rest of the world at least a decade before it was predicted to happen.

Climate-change researchers have found that air temperatures in the region are higher than would be normally expected during the autumn because the increased melting of the summer Arctic sea ice is accumulating heat in the ocean. The phenomenon, known as Arctic amplification, was not expected to be seen for at least another 10 or 15 years and the findings will further raise concerns that the Arctic has already passed the climatic tipping-point towards ice-free summers, beyond which it may not recover.

The Arctic is considered one of the most sensitive regions in terms of climate change and its transition to another climatic state will have a direct impact on other parts of the northern hemisphere, as well more indirect effects around the world.

Although researchers have documented a catastrophic loss of sea ice during the summer months over the past 20 years, they have not until now detected the definitive temperature signal that they could link with greenhouse-gas emissions. 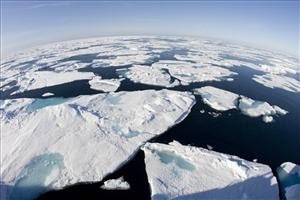 However, in a study to be presented later today to the annual meeting of the American Geophysical Union in San Francisco, scientists will show that Arctic amplification has been under way for the past five years, and it will continue to intensify Arctic warming for the foreseeable future.

Computer models of the global climate have for years suggested the Arctic will warm at a faster rate than the rest of the world due to Arctic amplification but many scientists believed this effect would only become measurable in the coming decades.