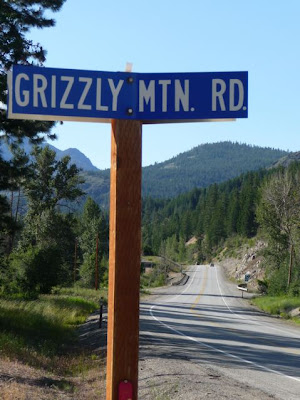 I ran across this road sign across from Grizzly Mountain on a trip through the North Cascades recently. I was on my way to Montana on my motorcycle, traversing some of the most beautiful wild areas in North America, on my way to a grizzly bear management meeting near Missoula. I’ve passed the Highway 20 road sign near Mazama on many occasions during my work with GBOP, but this time I was compelled to stop and take a picture. It’s a strange thing to think that these mountains once supported a healthy population of North Cascades grizzly bears. Trapping records show that there were once probably hundreds, if not thousands of grizzly bears in this region. In fact almost 4000 hides were shipped out of the region over a 30 year period in the late 1800s. Now fewer than 20 North Cascades grizzly bears remain – in an area covering 10,000 square miles. Interestingly, the last legally killed grizzly bear was shot less than 25 miles from this road sign in the late 60’s.

But times are changing. From what we have heard over the last 5 years of GBOP, it’s clear that the people of Washington really do support the idea of grizzly bears returning to this ecosystem. Just about everyone we speak to across the Cascades agrees that there is room for both humans and grizzly bears on this landscape. Our most recent research shows that 79% of people “support recovery” – 54% of them “strongly”.

In addition, 82% of respondents thought that the grizzly is a symbol of the American frontier and that it should be preserved as part of our national heritage. I think about that tone in a week that has been very patriotic, and it seems fitting that most people in this amazing state want to see a future for grizzly bears beyond a name on a road sign, or the peak of a mountain.