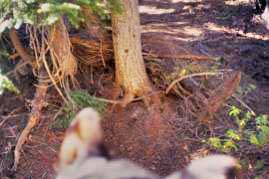 In the North Cascades there are approximately 6,000 Black Bears and less than 20 Grizzly Bears. Grizzly sightings generate a lot of excitement due to their rarity. When a credible Grizzly Bear report is received, efforts are made to verify the accuracy and to follow up and locate the bear.

This August a possible ‘Class I’ sighting of a Grizzly mom and her two cubs was reported in the Glacier Peak wilderness area. Sighting reports are rated by their credibility, accuracy and qualifications of the reporting party. A ‘Class I’ sighting is the highest rating and is most likely a Grizzly Bear. Final status of this sighting has not yet been determined.

The folks at Conservation Northwest sent a team to the sighting area to place a remote operated camera in the hopes of capturing photos of the Grizzly family. It was a long shot. Grizzly moms can move around within a 250 square mile area. Though the Grizzlies did not show up for a photo shoot, some other animals posed for the camera. The photo above is a cute pair of Black Bear ears.

A rare visit by a Wolverine was captured by the camera and was the highlight for the team. These elusive animals are seldom seen in the wild. 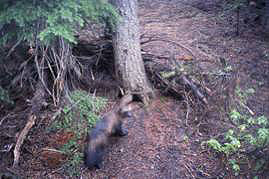 Core wilderness areas are teaming with wildlife. When you are out hiking, animals are aware of your presence and stay clear. When you place a secret camera, the real show begins. Many thanks to Conservation Northwest for their efforts in obtaining these photos.