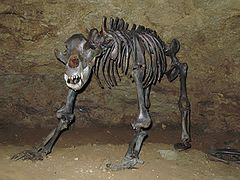 Enormous cave bears, Ursus spelaeus, that once inhabited a large swathe of Europe, from Spain to the Urals, died out 27,800 years ago, around 13 millennia earlier than was previously believed, scientists have reported.

The new date coincides with a period of significant climate change, known as the Last Glacial Maximum, when a marked cooling in temperature resulted in the reduction or loss of vegetation forming the main component of the cave bears’ diet.

In a study published in Boreas, researchers suggest it was this deterioration in food supply that led to the extinction of the cave bear, one of a group of ‘megafauna’ – including woolly mammoth, woolly rhinoceros, giant deer and cave lion – to disappear during the last Ice Age.

They found no convincing evidence of human involvement in the disappearance of these bears. The team used both new data and existing records of radiocarbon dating on cave bear remains to construct their chronology for cave bear extinction.

“Our work shows that the cave bear, among the megafauna that became extinct during the Last Glacial period in Europe, was one of the earliest to disappear,” said Dr Martina Pacher of the Department of Palaeontology at the University of Vienna. “Other, later extinctions happened at different times within the last 15,000 years.”

Dr Pacher carried out the research alongside Professor Anthony J. Stuart of the Natural History Museum, London, and the University of Durham.

Many scientists previously claimed that cave bears survived until at least 15,000 years ago, but Dr Pacher and Professor Stuart claim that the methodology of these earlier studies included many errors in dating as well as confusion between cave bear and brown bear remains.

The pair also concluded, from evidence on skull anatomy, bone collagen and teeth, that these extinct mammals were predominantly vegetarian, eating a specialised diet of high-quality plants. Compared with other megafaunal species that would also become extinct, the cave bear had a relatively restricted geographical range, being confined to Europe, which may offer an explanation as to why it died out so much earlier than the rest.

“Its highly specialised mode of life, especially a diet of high-quality plants, and its restricted distribution left it vulnerable to extinction as the climate cooled and its food source diminished,” said Dr Pacher.

The brown bear, with which Ursus spelaeus shares a common ancestor, was spread throughout Europe and much of northern Asia and has survived to the present day.

“A fundamental question to be answered by future research is: why did the brown bear survive to the present day, while the cave bear did not?” said Professor Stuart. Answers to this question may involve different dietary preferences, hibernation strategies, geographical ranges, habitat preferences and perhaps predation by humans.

Cave bears were heavily built animals, with males growing up to around 1000kg. The maximum recorded weight of both Kodiak bears and polar bears – the largest bears living today – is 800kg, with averages of around 500kg.

Scientists have recovered a large quantity of cave bear remains from many cave sites, where they are believed to have died during winter hibernation. Caves provide an ideal environment for the preservation of these remains.

Despite over 200 years of scientific study – beginning in 1794 when a young anatomist, J. Rosenmüller, first described bones from the Zoolithenhöhle in Bavaria as belonging to a new extinct species, which he called cave bear – the timing and cause of its extinction remain controversial.

By far the best source of information on the appearance of cave bears in the flesh is to be found in red pigment cave paintings in the Grotte Chauvet in the Ardèche region of southern France. These are the only depictions in Palaeolithic art that can be attributed unambiguously to the cave bear.