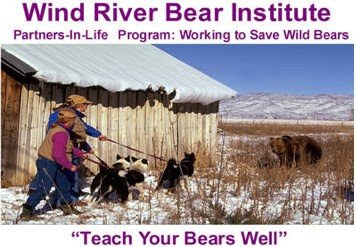 The Wind River Bear Institute (WRBI), together with its Partners-In-Life Program®, is an innovative program that is saving the lives of bears by changing the way they are managed and viewed by wildlife agencies and the public. The goal of this program is to reduce conflicts between humans and bears so the two can coexist in an ever shrinking world.

The WRBI uses knowledge of bear ecology and behavior to find solutions to human-bear conflicts and develop ways to prevent problems in the future. Most conflicts arise from bears getting human foods as well as pet food, livestock feed, bird seed and fruits from orchards. Bears that are habituated to people or are food conditioned are bears that have in most cases lost their fear of people; most attacks on humans have involved bears that were habituated or food conditioned.

Many people feel that “problem” bears should either be relocated or destroyed, but neither of these is a long term solution and both can be expensive and time consuming. Many “problem” bears that have been relocated return to where they were causing problems and end up being killed because the true problem, habituation and/or food conditioning, is not resolved.

Karelian Bear Dogs (KBD) originated in Finland where they were used mainly for hunting. They are extremely intelligent, fearless and have enormous energy making them a perfect match for the Partner’s In Life Program and for bear shepherding. KBD’s are a medium sized black and white dog that is very strong and muscular. They range in weight from 40-70 pounds and are 19-24 inches tall.

“The key components of the WRBI’s “Partners In Life Program” are that it emphasizes concurrent work on-site to teach people correct behaviors to reduce conflicts when living or recreating in bear country AND to rehabilitate and teach ”problem” bears correct behaviors on-site as well, through a non-lethal technique called Bear Shepherding®. This technique utilizes a strict protocol developed by WRBI to condition bears in the wild to modify undesirable behaviors that will lead to the eventual need to euthanize the bear, and as such, is the first of its kind. Bear Shepherding utilizes operant conditioning techniques where the bear learns to associate a human voice yelling “Get Out of Here Bear” with a painful or scary aversive stimulus causing it to leave or fade into cover as a wild bear should…. which teaches bears with problem behaviors to recognize and avoid human boundaries and developed sites. The Shepherding techniques teach the bears to control what happens by making correct choices. For example, when the KBDs “shepherd” a bear into appropriate cover or the bear otherwise leaves an area where it should not be, the Partners-In-Life team removes the “pressure” on the bear by recalling the KBDs. Bears may experience this training at the site of conflict or within areas they naturally inhabit, called their “home range.” This positive approach builds on the way bears operate and learn in the wild and uses their natural recognition of personal space and dominance hierarchies.

Since the Program began in 1996, several hundred bears and other wildlife conflicts have been handled annually by the Programs teams and extended Program “Family” of KBD/Handler teams. There have been no injuries to dogs, bears or handlers; a true testament to the commitment and training of both the WRBI teams and the dogs they work with.

The WRBI placed 2 of their KBD pups for use as Wildlife Service Dogs in Washington State. All dogs and owners are cared for, trained and handled, according to strict WRBI Program protocols to ensure safety and effectiveness for the Service Dog/Handler teams. The two Karelian Bear Dogs working in Washington State are both with Washington Department of Fish and Wildlife employees. “Mishka” works with Bruce Richards, Wildlife Law Enforcement Officer, and “Cash” works with Rich Beausoleil, Cougar and Bear Specialist. 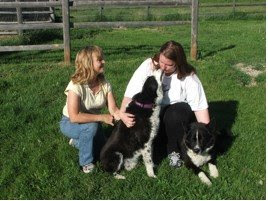 Wind River Bear Institute is a 501(c) (3) non-profit corporation that relies on the generous support of private donors who believe in the value of their work.