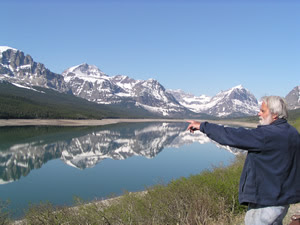 The Great Bear Foundation, Salish Kootenai College Media, and Ursus International are pleased to announce the launching of a documentary film on the life and work of Dr. Charles Jonkel, a patriarch of bear biology, and one of the most interesting, inspiring characters of our time.

Charles Jonkel has devoted his life to the study and conservation of wild bears and their habitat. A pioneer of bear biology, Jonkel was one of the first four researchers to study black bears in the field after the invention of the dart gun. With his successful work on black bears, the Canadian government sought him out to lead their groundbreaking research on polar bears, one of the first field studies ever conducted on wild polar bears.

In his eight years in the Arctic, Jonkel compiled the first reliable, comprehensive scientific database on wild polar bears. He developed the concept that polar bears make up distinct subpopulations that inhabit specific areas, disproving Peder Pedersen’s theory that the world’s polar bears consist of one population, traveling around the entire circumpolar region. Realizing the cultural importance of the polar bear hunt to Native people and its vital place in their subsistence lifestyle, Jonkel fought for and secured Native hunting rights in Canada. The quota system that he developed to manage polar bear hunting combined Inuit traditional knowledge, or Inuit Qaujimajatuqangit, with western science to determine the total number of allowable kills from year to year and. He and others set up the Polar Bear Specialist Group of the International Union for Conservation of Nature (IUCN), creating a framework for cooperation among the five countries with polar bear populations. This group became the model for all IUCN specialist groups. Charles Jonkel has worked in more areas of the Arctic than anyone else alive.

After nearly a decade working on polar bears, Dr. Jonkel returned to Montana where he taught wildlife biology at the University of Montana. His Border Grizzly Project was one of the most comprehensive studies of grizzly bears and their habitat requirements ever conducted. It helped to shape habitat, quota systems, and forest management policies in the West and to establish a better understanding of cumulative human impacts on grizzly bears. For the first time, policymakers and biologists were forced to examine the cumulative effects of all human activities and all other impacts on wildlife, rather than just the immediate, direct impacts of a specific project. Jonkel went on to direct research on aversive conditioning, testing the effects of potential bear repellants on black and grizzly bears.

While Jonkel is considered a father of bear biology, his influence extends far beyond the scientific community. Studying polar bears, he fell in love with the Arctic and became a champion of this little known northern world and the people and wildlife that inhabit it. Decades later, Jonkel continues his crusade to teach people about the Arctic, its beauty, and the threats that face the region today. As President and Scientific Adviser of the Great Bear Foundation, Jonkel devotes much of his time to educating the public about the world’s eight species of bears, their ecology, and the need to preserve their habitat.

Few people, if any, have done as much for bears as Dr. Jonkel. The Great Bear Foundation is seeking support for this effort – for more information visit their site.