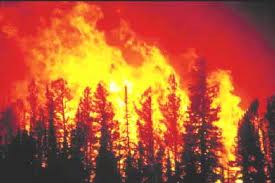 The Summer of 2012 is likely to go down in history as one of the worst years for fires across the American West.  As I write this there are major fires burning in Idaho and eastern Washington.  Some have affected friends, and one is still burning very close to family in Idaho.  One impact that cannot be easily measured is the effect on wildlife in the long run.

We know that wildlife often perishes in fires along with the forest.  For the most part, that is part of nature’s way, part of the cycle in the West.  But when the fires are too large, too frequent and too hot,  damage may be done to ecosystems that will take many generations to recover.  For wildlife populations that have been reduced to small endangered remnants surviving in isolated pockets,  the threat of rampant fires is particularly ominous.

In the past, forest and wildlife managers have mostly taken the approach that forests and wildlife will recover from forest and grasslands fires.  After all, some species such as grazers and woodpeckers benefit from new meadows with standing snags and succulent forbs.  But as the fires become larger and hotter, a direct result of climate change and more xeric conditions across the West,  no one can really predict what changes we will see.   But it is not hard to predict that species on the edge, still fighting for recovery like wolves and grizzly bears, will be at increasing risk of survival as fire continues to alter their habitat in ways that remain to be seen.  As we continue to fine-tune plans for managing endangered wildlife,  it is certain that consideration must be given to the likely impacts of climate change such as hotter, faster, more damaging fires.