By CANDICE GAUKEL ANDREWS Reprinted  with permission from the author

We all love our national parks. They are our places of solace and refuge; of natural beauty and outdoor adventure. They afford us the chance to get close to what’s left of what is still wild. Of course, there is an inherent conflict in that. Once we have gotten close to “what is still wild,” we change it forever. That has never been truer than it is with bears. Bears are smart and they learn quickly, and what they’re picking up from contact with us could kill them.

Just two years ago, in the summer of 2013, a female black bear in an area just northeast of Yosemite Valley demonstrated her impressive abilities in cracking open bear canisters, a human invention that is supposedly “bear-proof.” Although no one has seen her in action, apparently she didn’t paw or chew on the containers, as other bears have done in the past. At a campsite where the canisters, filled with food, had been stashed near ground level, she went in at night and moved them to a nearby, 400-foot-high ledge. She then pushed the canisters off it and promptly scrambled down to the cliff’s base to retrieve the goodies.Park personnel had never come across anything like this before. It appears bears are keeping abreast of our innovations to thwart them. And in the end, it will probably kill them. 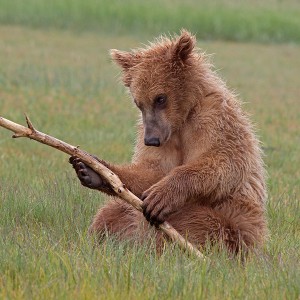 Today, it’s estimated that there are about 30,000 wild black bears in California.(Editors Note: Washington State has between 20-22,000 black bears and shares some of these same bear/human conflicts) In Yosemite National Park, there could be 300 to 500 black bears. If other bears were to start mimicking the Yosemite Valley female’s behavior, the state’s (and all states’) entire backcountry camping system—a key element of which is bear-proof food canisters—could be undermined. Bears are intelligent, and if one bear picked up that behavior, another could soon follow. It would create a free-for-all on backpackers’ food supplies and would almost certainly lead to bear-human interactions and conflicts.  Because park staffers can’t let that happen, last year they caught the clever bear and placed a GPS collar on her in order to track her movements. They set up extra patrols to haze her and to instruct campers to keep far away from the ledge. The incidents stopped in 2014, but this summer the bear started swiping canisters in the same area again. The park’s wildlife management department may have to pursue more drastic measures: banning campsites in the vicinity of the ledge altogether or euthanizing the bear.

Last August, in a study conducted at the Washington State University (WSU) Bear Research, Education and Conservation Center, eight grizzly bears were tested to see if they could use tools. In an experiment designed by student Alex Waroff, grizzly bears were enticed with a glazed doughnut dangling just out of their reach in their play area on the WSU campus. The researchers place a sawed-off tree stump below the hanging doughnut (which is not part of their normal diet) to see if the bears would use it to stand on to reach the treat. If they did that, then the stump would be turned on its side and moved away to see whether the bears would move it back under the gooey confection.  The study team hopes that this research will help us understand how bears think and that then we can anticipate their moves and alter our practices in the backcountry to keep us and the bears safe—mostly from us.

In the end, the Yosemite bear’s behavior is a reflection of our own. One mistake from one careless camper is all it takes to endanger a smart bear. In reality, as it’s often been said, wildlife management is 95 percent human management.  When animals outsmart us, should they be the ones to suffer? Since it is most often humans who make “problem bears,” should we be the ones that are hazed out of bear areas? Is euthanizing a bear ever the best solution?