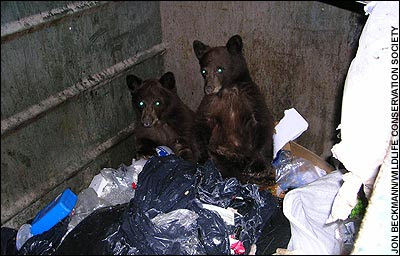 Bears are deserting traditional mountain and forest ranges and moving into towns where they scavenge for food. This attraction to ‘fast food’ in urban areas is luring black bears in North America to an early death, scientists have found.

Why? So many young bears are killed in traffic accidents that it is threatening the viability of wild populations.

A 10-year study in the Sierra Nevada Mountains looked at the effects a landscape changed by human activity was having on the black bear (Ursus americanus). Led by the Wildlife Conservation Society (WCS) it looked particularly at whether exposure to humans and new food resources in the form of rubbish was affecting bear life history patterns.

Scientists followed 12 female bears in an urban environment and 10 females in wild land habitats from 1997-2006. All 22 bears were sexually immature females who could be followed through their life cycle.

The study, published in the Autumn 2008 issue of the journal Human-Wildlife Conflicts, had to be limited to 10 years because by then all the urban bears had been killed in traffic accidents while six of the bears still living in the wild survived. During the study the team handled a total of 43 female bear cubs and of those 28 (65 per cent) were dead before they reached 15 months of age.

Despite the bear being a protected species in Nevada, 89 bears were killed by vehicles, 27 by agency management actions for public safety, 17 for attacks on livestock, two due to illegal killing, and 16 due to other causes – such as being humanely put down because of their poor condition.

The study found that bears who lived in urban areas weighed an average of 30 per cent more than bears in wild areas due to a diet heavily supplemented by scavenged rubbish. As a result female bears give birth at a much earlier age – on average between four and five years old, compared with seven to eight years for bears in wild areas. Some urban bears around the Lake Tahoe area even produced young as early as two to three years of age.

The scientists concluded there had been a dramatic and rapid ecological shift of bears from the wild to urban areas in only 10 years to the extent that they found only one wild bear in the Carson Range outside the state capital of Carson City where historically they had always existed.

WCS researcher Jon Beckmann, the study’s lead author, said: “Urban areas are becoming the ultimate bear traps. Because of an abundant food source – namely garbage – bears are being drawn in from backcountry areas into urbanised landscapes where they meet their demise.”

The WCS is studying the effects of urban sprawl on a variety of wildlife and habitats in north America and is working with local authorities to increase the use of bear-proof rubbish containers and improve education efforts to reduce human-bear conflicts.

First published in the Telegraph. Read the full story.