Thousands of people go camping, fishing and recreating in bear country every year which means there is a need for bear resistant products that you can store your food/catch in. 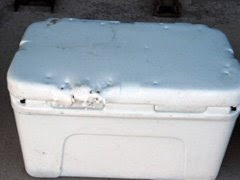 There are bear resistant food containers, bags so you can hang your food and now there is a bear resistant cooler officially approved by the Interagency Grizzly Bear Committee. It is called the YETI.

YETI Tundra ice chests have been thoroughly tested by the Interagency Grizzly Bear Committee (IGBC) in both controlled simulations and with wild grizzly bears. The IGBC officially approved the YETI Tundra coolers for use on public lands occupied by grizzlies. The IGBC publishes minimum design and structural standards, inspection and testing methodology for BEAR RESISTANT CONTAINERS. YETI Tundra coolers met the IGBC requirement both in the engineered test and the live bear test.

The containers come in many different sizes and price ranges to meet the needs of almost anyone.

It is nice to see this new bear resistant product. Use of the YETI will help keep many bears from getting into human food which in turn will keep them from becoming problem bears.