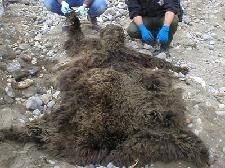 MOSES LAKE, Wash. – Two Grant County men are expected to appear in federal court next week, accused of shooting one of Washington state’s few grizzly bears. The case stretches back to a hunting trip in October 2007, during which investigators say the men shot a full grown male grizzly in Northeastern Washington’s Selkirk Mountains.

Kurtis Cox and Brandon Rodeback are then accused of transporting the dead bear to property near their homes in the Moses Lake area. State and federal wildlife investigators say they were able to find the burial site.

“Officers found a grizzly bear carcass and a grizzly bear hide and head in two separate holes buried on the family farm,” said Deputy Chief Mike Cenci, of Washington Fish & Wildlife Enforcement. Investigators were able to determine from tests that the bear was a valuable research subject.

State and federal wildlife officers say a tip led them to the suspects and a site where they tried to hide the bear. They released this photo of the bear’s hide. “It had an ear tag,” Cenci said. “Biologists had been tracking that animal for 14 years, so we know a lot about its life history.”

Wildlife groups say killing any member of the state’s struggling grizzly bear population is a big setback to hopes the large bears will reestablish a presence in Washington state. “It really increases the chance that this animal is not going to make it, and we cannot afford to lose anymore bears in the Cascades or the Selkirks,” said Paul Bannick, Seattle Director of Conservation Northwest.

Once plentiful in Washington and most of the rest of the Western states, the grizzlies were all but hunted into extinction. Efforts to protect them have helped increase numbers in Montana, Idaho and Wyoming. The return of the bears to those states has already generated heated concerns from some ranching and hunting groups.
Those same concerns are now being voiced as Washington state prepares for what appears to be the grizzly’s imminent return to this state. Shooting a grizzly in any state is a violation of federal endangered species laws and could lead to six months in jail and heavy fines.

Cox and Rodeback are expected to appear before a federal magistrate in Spokane next week. KING 5 was unable to contact either man today. Court documents indicate the two men explained to investigators they didn’t realize the bear was a protected grizzly, not a common black bear for which Rodeback had a hunting permit.