See our brochure about the Selkirk Mountain Ecosystem.

The Selkirk Mountain Ecosystem includes approximately 2,200 square miles of northeastern Washington, northern Idaho, and southern British Columbia, Canada. Approximately 1,040 square miles, or nearly one-half of this area, is within British Columbia, Canada. Within the United States portion of the ecosystem, the Colville and Idaho Panhandle National Forests and the Idaho Department of Lands administer public lands. The Selkirk ecosystem is fairly well defined by geographical boundaries, which includes the southern most portion of the Selkirk Mountains bounded by Kootenai Lake and the Kootenai River on the north and east, and the Salmon and Pend Oreille Rivers on the west and south and the Kootenai River Valley to the east. There are currently believed to be at between 50 – 70 grizzly bears in the Selkirk Recovery Area with numbers approximately equally divided between the Canadian and U.S. portions of the ecosystem. (from the Interagency Grizzly Bear Committee Website, accessed December 2010) 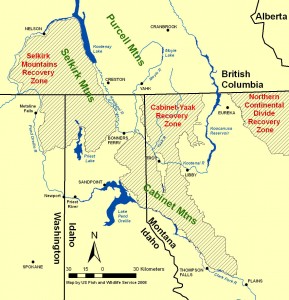 The United States portion of the Selkirk Recovery Area is approximately 80% Federal, 7% State, and 13% private lands. The Idaho Panhandle and Colville National Forests administer Federal lands within the recovery zone. Approximately 10% of the private lands within the recovery area are under the management of the Nature Conservancy of Canada, the remaining private lands within the recovery is largely corporate timberlands. Approximately 11% of this recovery zone is within designated wilderness, proposed wilderness, Provincial Parks or Scenic Areas. The remainder of the area is within a ‘working forest’ where guidelines for the management of the forest roads network are implemented to secure habitat for bears. Management of forest roads allows the Forest Service and other land managers to close forest roads to motorized vehicles if they determine it will benefit grizzly bear recovery. See the Interagency Grizzly Bear Committees website for more information about Motorized Access Management.

In 1992, 160 square miles (420 km2) of habitat was added to the Selkirk recovery zone as a result of the revision of the existing recovery plan. The area was added because of frequent use by radio-collared bears during spring (Wakkinen and Zager 1992). Vital Ground, a land trust organization, has been active in purchasing private lands within the Selkirk Ecosystem with the goal of restoring and conserving habitat for the grizzly bear. In 2008, the Nature Conservancy of Canada acquired the Darkwoods Ldt lands (230 square miles) within the British Columbia portion of this ecosystem. The Nature Conservancy of Canada intends to focus the management of those lands for caribou and grizzly bear recovery and other rare wildlife species. 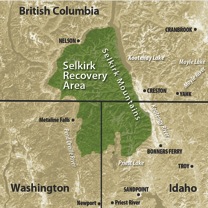 In addition to the designated recovery zone an additional 254 square miles of habitat that is outside of the recovery zone has been identified important for grizzly bears, especially for female bears with young. The significance of this land was determined by monitoring radio-collared bears and by evaluating habitat quality. The McAuthor Lake area, which is located on the southeastern portion of the ecosystem, has been identified by the Interagency Grizzly Bear Committee as important habitat that can provide connectivity for grizzly bear movement between the Selkirk and Cabinet-Yaak Ecosystems. 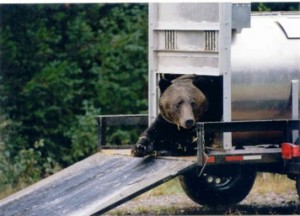 Between 1982 and 2008, 61 grizzly bear mortalities were documented within the Selkirk Mountain Ecosystem, 37 of which have occurred on the British Columbia portion of the ecosystem. Within the entire ecosystem, 17 grizzly bear mortalities have been classified as management removals, 16 of which have occurred within British Columbia. In 2007, the only management removal occurred within the United States portion of the ecosystem when a sub-adult grizzly bear was considered a safety concern after it became food conditioned and habituated to human presence. A significant portion of the management removals in British Columbia has been attributed to food conditioning of bears. Records from 1982 to 2010 show there has been an increasing trend in grizzly bear mortality associated with private lands and public facilities within and adjacent to the recovery area. 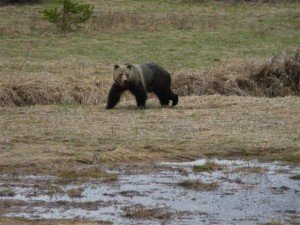 Illegal mortality, mistaken identity, and self defense, has resulted in 12 grizzly bear mortalities, the majority of which have occurred with the United States portion of the ecosystem.

No grizzly bear attacks have been documented within the Selkirk Mountain Ecosystem in the past 50 years.

Currently, no public opinion and knowledge surveys regarding grizzly bears have been conducted within or adjacent to the Selkirk Grizzly Bear Recovery Area. However, in 2007,a survey was conducted in a community adjacent to the Cabinet-Yaak Grizzly Bear Recovery Area and because of the close proximity of this recovery area to the Selkirks, the survey results may reveal some insights about the knowledge and attitudes about grizzly bear recovery of people living in the Selkirk Mountain Ecosystem.

The following are excerpts from the executive summary of the Public Opinion and Knowledge Survey of Grizzly Bears in the Cabinet Yaak Ecosystem.

Though 54% of respondents believed that grizzly bears can be dangerous to humans, more than 70% indicated that grizzly bears belong in the Cabinet-Yaak Ecosystem (CYE) and should be preserved as a symbol of our national heritage. Fear of grizzly bears appeared to be the primary reason why some respondents opposed having them in the CYE. Respondents were aware of the most common reasons why a grizzly bear might attack a human, but the majority was unaware of how many people are actually attacked or killed by grizzlies each year in the lower 48 states, which is relatively infrequent. We were unable to locate any documented cases of a grizzly bear caused human injury or death within the CYE in the past 35 years.

One of the more controversial subjects brought up during public meetings in the last decade was implementation of motorized access restrictions on National Forest lands. However, one third of respondents stated that they were unaware of the current road restrictions on National Forest lands. In addition, 69% stated that grizzly bear recovery efforts had not negatively affected their employment or recreation opportunities. When asked about support for current road restrictions, 49% supported and 42% were opposed to them. Fifty-eight percent were opposed to any additional road restrictions in the future and 31% were in support of them.

Overall, the majority of respondents indicated support for the recovery of grizzly bears in the CYE, yet concern remained over specific management actions (road restrictions, augmentation and final population goals) proposed to achieve recovery. Respondents were more aware of augmentation efforts in the early 1990’s than they were of more recent efforts (2005 and 2006), suggesting that better efforts are needed to keep the public informed of this aspect of the grizzly bear recovery program and educational efforts may benefit residents understanding of this management practice. Most often cited sources of information from the participants were newspapers, magazines, television and film. These sources probably offer the best media opportunities to reach the local public.

Historical Accounts of Grizzly Bears within the Selkirk Mountain Ecosystem

From:
The Grizzly Bear, the Narrative of a Hunter-Naturalist, by William H. Wright
Foreword by Frank C. Craighead, Jr., Copyright 1909
Page 105
“For years before I visited the district (northeast Washington), I had heard wonderful stories of the grizzlies of the Selkirk’s. I had heard how plentiful they were and how ferocious they were, and how many miners were killed by them every year. I had met old prospectors and trappers who insisted that several species were found among them – the Roach Back, the Silver Tip, the Bald Face, and now and again a Range Bear. Of course they agreed that the Bald Face was the most dangerous and the most aggressive, and declared the he would turn from the trail for neither man or beast, but, with a chip on his shoulder, was always on the lookout for some prospector whom he might mangle for the
fun of it.”

H.C. Lindsley also recorded in his journal in 1889 that the Pend Oreille drainage just west of the Priest lake area was “full of…caribou….wolves, otter..fisher…brown and silver-tip bears…” and “there are a good many sheep here.” He and his partner killed 52 bears, 25 caribou, 40 wolves and 50 fishers in one year.