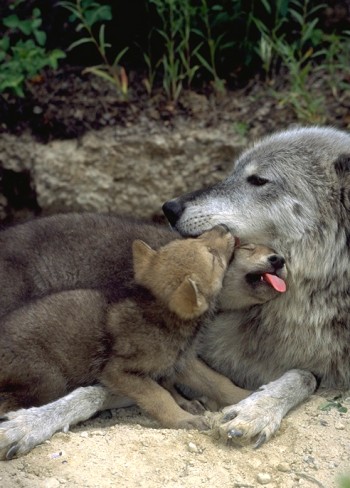 Wolves are highly social animals that live in packs. A pack is an extended family group comprised of a the breeding, or “alpha” male and female pair and some of their  subordinate offspring and current pups from one or more years. The alpha wolves decide when the pack will travel and hunt, and normally are the first to eat at a kill. The pair’s offspring normally disperse into adjacent or available territories at 2 to 3 years of age. For packs studied in the Northern Rocky Mountain region, the average dispersal distance and subsequent new pack formation is about 65 miles. For highly cursorial and very mobile wolves, this is “next-door.” Recent satellite-collar tracking data, however has shown that some offspring and individual wolves have dispersed more than a thousand miles in three or four months!

Almost always, only the male and female alphas of the pack will mate. Wolf packs typically have one litter of pups per year.  Mating typically occurs between January and March.

Wolves begin breeding between 2 and 3 years of age and are believed to mate for life. Once sexually mature, most wolves leave their birth pack to search for a new territory or to join an existing pack. Dispersing wolves roam 40 to 70 miles on average, and sometimes more than 100 miles, depending on gender, available habitat, and presence of other packs.

Wolf pups are born blind and deaf in an underground den after a 63-day gestation period. Litter size averages 4 to 6 pups. During the first 3 weeks, pups nurse every 4 to 6 hours and need help regulating their body temperatures. The mother usually stays with her young in the den, eating food brought to her by other members of the pack.

Wolf pups are weaned at about 8 weeks of age once they have begun eating semi-solid food, regurgitated by the mother or others members of the pack. As pups begin eating more solids, they are moved to one or more “rendezvous sites,” where they spend the remainder of the summer learning proper pack behavior and etiquette. At 6 to 8 months, the pups begin to travel with the pack and join in hunts. Fewer than half of wolf pups born in the wild survive to adulthood. Survival rates are affected by disease, malnutrition and predation.

Few wolves live more than 5 years in the wild, but with ideal conditions can reach 15 years of age. Wolf populations are naturally regulated by prey density and territorial disputes among wolves. In many areas, numbers are mainly limited by human-related factors, including illegal killing, control efforts to address livestock depredation and car accidents. As wolves return to Washington and expand their range in Idaho, it is expected that pack sizes will be similar to those found in the Northern Rockies, which average 5 to 10 animals. In areas with abundant prey, packs can have 20 or more members.

Visit http://www.alaska.net/~wolfsong/wolf_pup_develop.html for a Wolf PupDevelopment chart, describing how pups mature as they grow older.

In the western United States, wolves prey primarily on deer, elk, and moose. Wolves are opportunistic feeders and will also eat smaller mammals such as beavers and rabbits, as well as occasional domestic livestock, dead animals, and vegetation. Coastal wolves in British Columbia are known to eat migrating salmon and even mussels on the salt-water beaches.

Adult wolves eat 5 to 14 pounds of meat per day on average, but sometimes 12 days or more may pass between feedings. Because hunts are successful only 3-14% of the time, wolves survive on a ‘feast or famine’ diet.  After a successful kill, wolves devour the carcass, sometimes eating as much as 20 pounds, and then may remain relatively inactive for one or more days, digesting their meal.

Wolf kills can be differentiated from other predator kills by studying prey remains.  Wolves typically attack the hindquarters, flanks, shoulders, nose, and tail of their prey. They feed preferentially on the viscera and hind limbs. The feeding strategy is not obvious if the animal is attacked by a pack, as the carcass is usually quickly consumed.  Wolf tracks, hair and scat can often be found near a wolf kill. 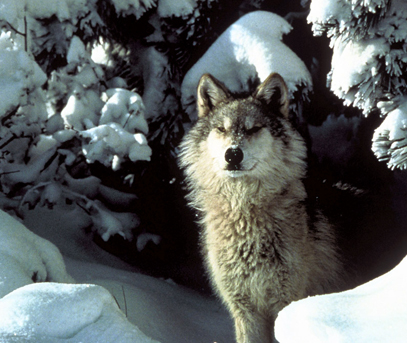 Wolves can survive in a variety of habitats, including forests, tundra, mountains, swamps and deserts.

Territory size is typically based on the density of prey but is also influenced by pack size, presence of neighboring packs, and human land use. Wolves will aggressively defend their territories from other packs.

Wolves spend about 35% of their time traveling. They often travel 20 to 30 miles per day, but may cover over 100 miles in a day when prey is scarce.

Wolves only use dens when they have young pups that are not yet able to travel with the pack.

Wolf dens are usually located near water and dug into well-drained soil on a south-facing slope. They can be dug under a boulder, among tree roots, or in cut banks, hollow logs or other sturdy natural structures. Wolves often enlarge existing coyote or fox dens.

Wolf den entrances measure about 18 inches in diameter. The passageway, which may be straight, forked or hooked, is 4 to 18 feet long with a chamber measuring about 20 inches high by 50 inches wide by 40 inches deep.  No bedding is added to the den. If the den has been used in past years, bones will be scattered about and well-defined trails should radiate from the den. It is common for dens to be reused.

Communication between pack members allows wolves to care for and feed of their young, defend their common territory, and cooperatively bring down prey larger than could individual wolves on their own. 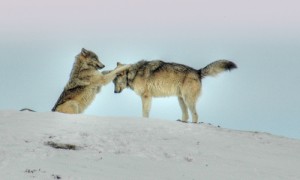 A great deal of the communication among wolf pack members involves body language. Specialized behaviors and postures have evolved that help reduce aggression between individual animals within the pack. Body language helps the pack live together more agreeably.

Facial expressions are often used to express emotions. Wolves may indicate dominate behavior by baring teeth and pointing erect ears forward. Subordinate behavior may be indicated by closed mouths, slit-like eyes, and ears pulled back and held close to the head.

A wolf’s sense of smell is up to 100,000 times greater than humans’. Under good conditions a wolf can smell something a mile or more away. Scent is a very effective means of communication for wolves.

Wolf packs are highly territorial. Scents are used to clearly mark the boundaries of territories, to claim and defend that territory from other packs, to mark food ownership, and to act as a sort of road map for the pack itself. Scent is a way for a pack to make its presence known long after it has moved to another part of its territory.

Urination is the most common form of scent marking for wolves. Wolves produce scent from  glands between their toes.

Vocal communication among wolves consists of a panoply of howls, whines, growls and barks. 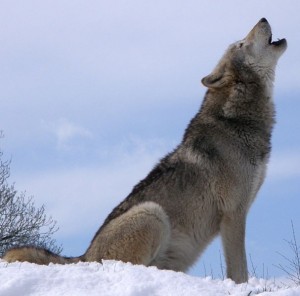 Although all the functions of howling are not known, scientists believe that wolves may howl to assemble their pack, to claim territory, to warn intruders away from a home site or kill, or to identify other wolves. Wolves also howl in the evening and early morning, in the summer when pups are young, and during the mid-winter breeding season. It is a myth that wolves howl at the moon, but they do point their snouts toward the sky to howl. Projecting their call upward allows the sound to carry farther. Wolves have excellent hearing, and under certain conditions can hear a howl as far as six miles away in the forest and ten miles away on the open tundra.

A wolf howl is a deep and continuous sound from about half a second to 11 seconds long. The pitch usually remains constant or varies smoothly. A howling session by a single wolf lasts an average of 35 seconds, during which the animal howls several times. A howling session by a pack lasts an average of 85 seconds. It is initiated by a single wolf, and after its first or second howl one or more others may join in.

Alpha wolves usually display a lower-pitched howl and will howl more frequently than those with a more subservient social standing. Pups practice howling as they mature, mimicking those of adult wolves. Lone wolves may not howl as much to hide their position from other residential wolf packs.

Except for the high-pitched yapping of pups, wolf howls almost never include barking. Whines are used often at the den site, primarily by the adult female. They are thought to be sounds of affection. Growling conveys aggressiveness and usually comes from a threatening dominant male.

Visit http://www.pbs.org/wgbh/nova/wolves/howl.html to hear different types of wolf howls: a lonesome howl, a pup howl, a confrontational howl and a chorus howl. 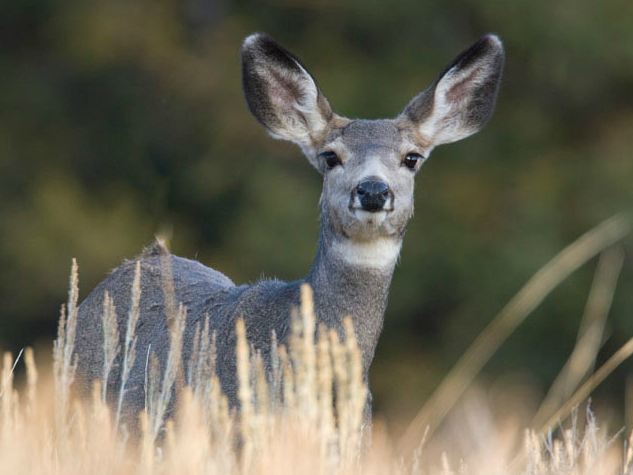 Large predators like wolves and cougar play an important role in maintaining the health of natural ecosystems. Wolves prey primarily on animals that are young or elderly, sick or injured, and weak or unfit, thus keep prey populations healthy.

By preventing large herbivores, such as deer and elk, from becoming overpopulated wolves help maintain native biodiversity. Deer and elk can overgraze their habitat when populations outgrow the carrying capacity of an ecosystem. Overgrazing destroys the plant base, making the habitat less suitable for other species. When gray wolves were reintroduced into Yellowstone National Park in1995 after a 70-year absence, they began to restore ecosystems that had been degraded in their absence.

If gray wolves are given proper protection in Washington State, their population should rebound naturally.  As wolf populations grow in neighboring Idaho and Canada, the dispersing wolves will continue to expand into Washington, increasing the numbers and genetic diversity in this state.

In these early stages of recovery, however, the loss of the breeding female in the Lookout Pack is an example of how precarious the wolves’ status is.  The loss of even a single individual can have a significant impact, particularly when that individual is the alpha male or female.

As gray wolves expand throughout Washington they will confront a number of challenges: there are large highways crossing the Cascade Mountains which act as barriers to travel for the wolves;  elk, their primary prey species, are not nearly as abundant as they were historically; urban sprawl is rapidly expanding along the highways that cut through the mountains, reducing the amount of prime habitat for the wolves; and many people still have a fear of wolves that can result in them being shot, poisoned, or harassed until forced to leave an area.

Wolves play a critical role in healthy, dynamic ecosystems, and recent studies have shown that their activities can help mitigate the potential impacts of climate change. They keep ungulate herds strong by culling sick individuals, they allow plant diversity to increase by keeping grazers like elk on the move (called the “ecology of fear”), and the carcasses from their kills support other wildlife such as bald eagles, coyotes, bears and foxes.  By protecting large, connected tracts of wild lands, we can be sure that wolves will have the space they need to provide these important ecosystem services without coming into conflict with people.