Were Wolves Introduced to Washington?

No. Wolves are returning naturally from dispersing populations in nearby states and provinces.  Genetic testing has shown that the Northern Cascade packs, Teanaway and Lookout, originate from coastal BC wolves, while the packs in northeast Washington have likely dispersed from Idaho and south-central BC.

Why are wolves important to Washington?

Wolves are native to Washington and part of our state’s wildlife heritage. They were eliminated by the 1930s and are now returning to the state on their own. As a top predator, wolves naturally help keep wild elk, deer, and moose populations in balance with the available habitat, and maintain herd health by preying primarily on weaker or older animals. Recovering this endangered species will help return an important missing element of Washington’s complex of carnivores and their prey, which provides multiple benefits to a myriad of other species in an ecosystem.

How many wolf packs are in Washington?

By March 2013, Washington Department of Fish and Wildlife (WDFW) had confirmed nine wolf packs in Washington State – up from five in 2011. Identifying the number of known wolf packs is an ongoing process. Packs are documented by trapping, radio collaring, ear-tagging, or through photos from remote cameras placed in anticipated wolf locations.

How many wolves are in a pack?

A pack typically consists of five to ten wolves, including the dominant male and female. The rest of the pack may consist of pups from the current year and a few offspring from the past year or two that are subordinate to the breeding adults.  Adult wolves share in the care and feeding of the pups.

How large is one pack’s territory?

Wolf pack territories vary in size, usually ranging from 200 to 500 square miles. Wolves spend about 35% of their time traveling, covering roughly 20 to 30 miles per day – but sometimes more than 100 miles a day when prey is scarce.

Won’t wolves eat too many elk and deer?

No. Studies in other western states demonstrate that wolves take less than three percent of deer and elk herds annually. Deer and elk populations have remained stable, except in some areas where elk face other threats in addition to wolves. Wolves can cause elk or deer to spend more time in heavily forested areas, on steeper slopes, and at higher elevations than they did before wolves were present. These changes in behavior can contribute to the misinterpretation that wolves have caused decreases in elk or deer numbers.  Hunting opportunities might change with this change in ungulate behavior, requiring greater skill and patience.

How do we keep wolves from eating livestock?

Some wolves in some areas have learned that livestock can be easy prey. Range riders, wolf-targeted fencing, night penning, guarding and herding animals, and removing carcasses can help reduce depredation.  WDFW and other organizations are offering training in these techniques, with assistance from Western Wildlife Outreach.

What do wolves eat?

Wolves are carnivores and feed primarily on hoofed mammals (ungulates), such as deer, elk, moose, and caribou. They also prey to a lesser extent on beavers, wild turkeys, rabbits and almost any other small animal. Coastal wolves in British Columbia are known to eat salmon. Wolves are also natural scavengers and readily feed on the carcasses of dead animals.

Wolf attacks on humans are extremely rare.  Wild wolves generally fear and avoid people. In the past 60 years, there have been two wolf-caused human fatalities in North America; both occurred in Canada and Alaska. There have been no physical attacks on people by wolves in Idaho, Montana, or Wyoming from the time wolf recovery began in the 1980s until the present.

Wolves and domestic dogs are the same species, Canis lupus. Dogs are subspecies Canis lupus familiaris. Wolves may view domestic dogs as competitors or territorial intruders and may attack or kill them, especially in remote areas. Dog owners should be aware of the potential risk to their dogs if they are in wolf habitat. Owners also need to take responsibility for their dogs in areas where wolves live, keeping them controlled and not letting them run wild or unattended, especially at night.

All wolves are currently protected as endangered species under State law in Washington. Wolves are still endangered under federal law in the Western 2/3rds of the State. The Washington Fish and Wildlife Commission adopted a Wolf Conservation and Management Plan in December 2011 after nearly five years of development with a citizen advisory group and extensive public review, including SEPA review. The plan includes recovery goals for wolves along with procedures for managing predation on livestock and impacts to local wild elk, deer, moose and other ungulate populations, in the event that this should occur. More research is needed on the interaction of wolves and their prey in Washington.  The recovery goals call for de-listing wolves when 15 successful breeding pairs are present for at least three years, with at least four pairs in Eastern Washington, four in the Northern Cascades, four in the Southern Cascades and Northwest Coast, and three anywhere in the state. The de-listing process could also occur if 18 successful breeding pairs are documented in a single year with at least four pairs in each recovery region. The plan provides a variety of non-lethal measures to control wolves that prey on livestock and establishes conditions for compensating livestock owners who lose livestock to wolf predation, and allows for issuance of permits to kill wolves that are caught in the act of killing livestock.  However, producers must first take non-lethal control measures.

What happens when wolves are suspected of killing or injuring livestock?

When livestock owners report suspected wolf-caused injuries or losses to WDFW, an agency depredation investigation team will respond to the scene to determine if wolves were involved. Other local, state and federal authorities might also be called in to assist with the investigation. Livestock or livestock carcasses are thoroughly examined; sometimes including full field necropsies, to help determine what kind of predator attacked or killed the animal. (Bears, cougars, wolves and other predators kill in different ways and leave different “signatures” on their prey.) When wolves are determined to be the cause of injury or death, livestock owners who have taken responsible steps to avoid such depredation are eligible to receive compensation for their losses, and/or caught-in-the-act wolf kill permits to avoid repeated depredations, depending on the situation. In repeated wolf depredation cases, it may become necessary to lethally remove the problem animal/animals to alleviate the problem.

I think I saw a wolf, but how do I know for sure?

It takes real expertise to determine this definitively. Coyotes, dogs and wolf-dog hybrids are often mistaken for wolves. It can be very difficult to determine if an animal is a wolf or hybrid merely by observing it.  Wolves can be told apart from coyotes by their wider snouts, shorter ears, larger size and the size and shape of their footprints.  Wolves are very shy and wary of people.  Western Wildlife Outreach has both posters and brochures available with photos and prints to help you distinguish the difference.  Coyotes in Washington are plentiful, while wolves are still very rare.

I think I saw a wolf, so where do I report it?

The WDFW and the U.S. Fish & Wildlife Service keep track of wolf sightings and other evidence (tracks, scat, howling, photos from remote cameras). The best way to make a report is through the toll-free reporting hotline, 1-877-933-9847. 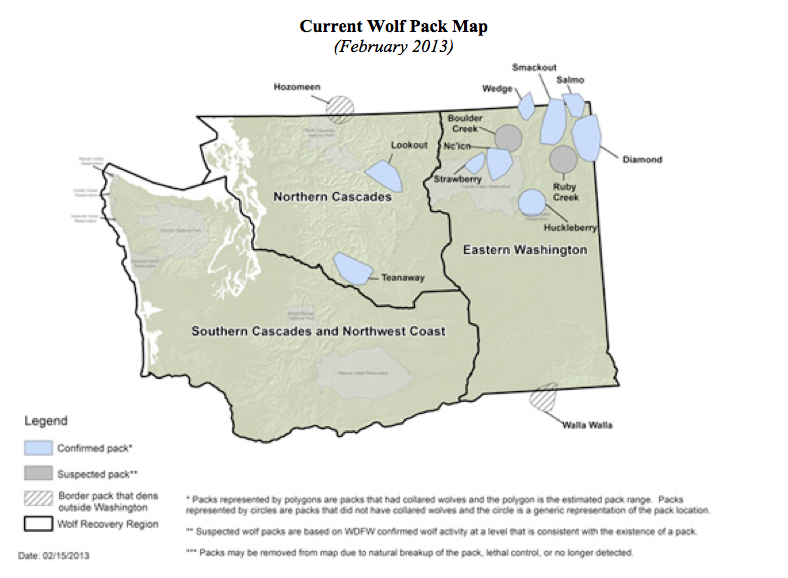