Editors Note: Western Wildlife Outreach has long been warning mountain bike enthusiasts about the need for caution when riding back country trails in bear and/or cougar country. The “need for speed” puts you at greater risk for coming into accidental contact with a large carnivore and surprising them. Surprised animals can react defensively and unpredictably to protect themselves or offspring. Slow it down, and carry bear spray.  Lorna Smith, WWO Executive Director 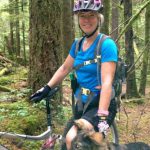 Wildsafe Community Co-ordinator, Kathy Murray’s journey toward becoming a wildlife expert was inspired by a close encounter with a grizzly bear in Banff National Park, 19 years ago.

On an evening bike ride through the Pipestone Loop Trail, Murray rounded a corner and came face to face with a grizzly sow and her cubs. The bear bluff charged her, stopping three feet in front of her face, with nothing by the bike held in front of her to separate them. The bears dodged around her, and Murray escaped with no injury. This encounter terrified Murray, and deflated her ambition to hike or bike anymore.

Refusing to let fear overcome her love for the outdoors, Murray set out to learn about how humans can coexist with some of natures largest and most fearsome animals.

“I decided to take that fear and turn it into something positive,” she said.

So far this year, there have been many bear sightings, the latest being this past Monday on 4th avenue. Also recently, there was a grizzly spotted on Old Stumpy Trail, and up by the power lines near the Mt. Proctor trails. Murray knows that the summer will soon bring with it lots of people focused on recreating.

“It’s really up to all of us, to be responsible, share the habitat, share the trails,” she said.

The reason for the many bear sightings is due to our heavy snowfall, and cold spring. With little food for the bears in the alpine, they are being forced into the valley bottoms to feed.

Murray believes we can expect to see bears in lower areas for a few more weeks, until the higher areas start to green up.

“People in general have to have a better understanding of bear behaviour,” said Murray. “And a better tolerance, so that we can peacefully co-exist.”

“Once bears get a taste of human garbage, human food, and lose their fear of people, it’s pretty much impossible to reverse the process,” she said. “Garbage to bears is like heroin to a crack addict.”

If this happens, the bear becomes what biologists consider a ‘problem’ bear, that we (the public) created.

A grizzly found in town close to a month ago, was relocated 15 kilometres out. The hope is that the bear will become comfortable in their new home, learn to feed and stay put. However this grizzly found its way back to town very soon after.

There are currently several biologists working in the Elk Valley, studying the way grizzly bears use the landscape in the Elk Valley and how they interact with people. They plan on having radio collars on ten sample grizzly bears, in order to track them and gain a better understanding of their activities.

Biologists have been conducting similar studies in the flathead for the past 36 years.

The grizzly which returned to Fernie does have a radio collar, and biologist are monitoring her behaviour. She has not been back after being relocated again.

A previous method of removing bears from an area was translocation, which took bears far away. However even if they were taken hundreds of kilometres away, the bears almost always found their way back again, or they become problem animals in another community.

Murray believes relocation and translocation, “…are not solutions.”

“The best way to keep people safe, prevent human wildlife conflict, and the needless destruction of bears, is to not bait them into the communities in the first place,” said Murray.

With many newcomers in town, Murray believes it is up to the old-time residents to lead by example, keep their garbage locked up, clean up their fruit trees and bring in their bird feeders.

If an individual does not have access to a carport or garage in which to store their garbage between collection days, Murray encourages the use of the 24/7 bear resistant communal bins found at the Fernie Memorial Arena, the Aquatic Centre, and Max Turyk Community Centre.

Since her arrival in Fernie in 2000, Murray has seen a massive increase in trail usage. She believe the high speed and quiet travels puts mountain bikers at risk of animal encounters. When approaching a blind corner, yell or call out, and always carry bear spray.

Murray will be running several sessions throughout the summer, teaching individuals how to properly deploy bear spray. She is currently teaching people at several businesses and schools in the area.