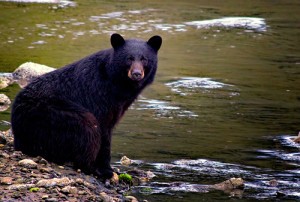 Under the cover of darkness, black bears prowl the banks of the stream, wading out among moss-covered rocks below overhanging branches festooned with drooping lichen. The bears are waiting for the return of their favorite feast, spawning salmon. The salmon are returning guided by mysterious forces that have inexorably drawn them from their ocean home back to the streams where they were born and where they will spawn and die, completing the circle of life. But there is a bigger story that goes beyond the salmon, the river and the bears. It’s a story about the intricate connection between the towering conifer giants of the temperate west-coast rainforests, the hungry bears and the returning salmon.

Northwest author Amy Gulick wrote about this story in her award-winning book Salmon in the Trees:

“What if I told you that the trees are here, in part, because of the salmon? That the trees that shelter and feed the fish, that help build the fish, are themselves built by the fish?”

~ Carl Safina, essayist for Salmon in the Trees

While it might seem somewhat intuitive that the nutrients and nitrogen provided by salmon are beneficial to aquatic plants and plants growing on the stream banks, it has only been in the last decade that the critical role played by bears, both black bears and grizzlies, in dispersing nutrients from salmon throughout the riparian forest has been identified and recognized as an essential component in maintaining the health of riparian forests.

Beginning with early studies by Tom Reichman in 2000, and continued by Gende, Quinn and other prominent researchers, primarily in British Columbia and Alaska, the ultimate “fate” of salmon carcasses removed from the river by bears has been tracked. One such study examined the transport of the salmon into the forests in three watersheds in Southeastern Alaska over three seasons using tagged sockeye salmon and the ultimate location of the recovered tags to tell the story. The results were surprising: up to 50% of the fish caught and killed by bears, both brown bear and black bear, were transported away from the streams and into the surrounding temperate rainforest. Once the bears have successfully landed a protein-rich fish, they often disappear with the prize deep into the trees in order to avoid competition from other bears or scavengers. Once there, the remains of the fish are scattered through the forest,  along with bear scat.

And now the story really gets interesting. Following up on this initial research regarding nutrient transport into forests, a team of researchers headed up by James Helfield and Robert Naiman of the University of Washington’s College of Forest Resources devised a method to measure the actual amount of marine-derived nitrogen in trees through coring the trees and examining the stable nitrogen isotope ratios of annual growth rings.

Nitrogen availability has been identified as the limiting factor for terrestrial plant growth in riparian ecosystems. The study concluded that trees and shrubs near spawning streams grew three times faster than other control stands, and that salmon-borne, marine-derived nitrogen is the reason why. As riparian forests affect the quality of in-stream habitat through shading, sediment and nutrient filtration, and production of large woody debris (LWD), this fertilization process serves not only to enhance riparian production, but may also act as a positive feedback mechanism by which salmon- borne nutrients improve spawning and rearing habitat for subsequent salmon generations and maintain the long-term productivity of river corridors along the Pacific coast of North America.  And all of this marine-derived nitrogen from salmon is transported and made available to the trees by bears!

Over millenia bears have been fulfilling this age-old critical role of salmon carcass dispersers, moving nutrients from the stream to the forest, so that riparian trees grow tall and strong, eventually contributing large woody debris to streams, improving spawning and rearing habitat for subsequent salmon generations and maintaining the long-term productivity of river corridors along the Pacific Coast of North America. Its time to give bears there due in the watersheds of the Pacific Northwest as the real kings of the forest.