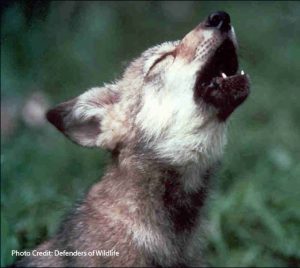 Researcher Rescued from Tree: Wolves Keep Watch Below, but Show No Signs of Aggression

This should have been the toned-down headline for a recent news story of a student doing fish research in eastern Washington State who encountered a pair of wolves near their den/rendezvous site, and the wolves eventually approached her . She retreated 30 feet up a tree in response. She had to be rescued by helicopter after radioing for help! Instead we have seen a myriad of headlines regarding this story like this one:

Wolves are the least dangerous of all the large carnivores you might encounter in North America.   However, certain safety rules ALWAYS apply when working, playing or living in the back country and the first of those is to BE SITUATIONALLY AWARE.   The woman in the story recounted that she had noted wolf tracks and heard barking and howling for some time before the wolves actually showed themselves. A strategic avoidance of an area with that much wolf sign is the foremost safety rule. From the interviews that WWO did following the event with involved agency personnel, (although none with the woman who was rescued from the tree) it appears that she was unaware she was in wolf country, and although she deployed bear spray, she apparently knew next to nothing about wolves and was unaware that she might encounter them there,  (although maps of known wolf territories are readily available on the Washington Department of Fish and Wildlife website) or what to do if she should encounter them.

It is not clear what the student was doing in such a remote area with which she was unfamiliar, working alone. That in itself is not a safe practice for so many reasons, the least of which is “threat by wolves”.

Western Wildlife Outreach commends the agency response to this situation. WDFW issued a press advisory update , along with U.S. Fish and Wildlife Service who manage wolves in this part of the state where wolves are still covered under the federal Endangered Species Act.   In that statement both agencies recognized that the wolves were near their former den site and rendezvous areas where pups are taken after leaving the den, but before they are old enough to travel and hunt with the adults.   The two adult wolves were protecting their young, gave ample warning that they wanted the human “intruder” to leave by howling and barking for some while before approaching her, but never acted aggressively. No control action is required or recommended in this situation by either agency.

So what do you do to stay safe in wolf country? Here are Western Wildlife Outreach’s safety recommendations:

If you encounter a wolf or other large carnivore that is displaying habituated behavior (not afraid of people) please report sighting and details to the Washington Wolf Reporting Hotline at 888-584-9038.