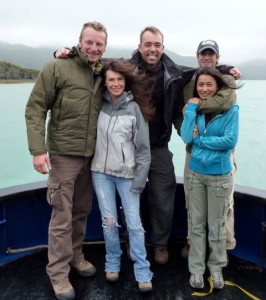 I want to reach out to all my friends at Western Wildlife Outreach and let them know what I am up to these days. My film career on behalf of bears and other threatened wildlife has taken me around the world to some fascinating places working with incredibly dedicated people. Right now, I am in the Arctic filming Polar bears with my long-time friend and cameraman, Joe Pontecorvo. I am often asked how large our film crew is when we are out on remote locations.

Joe is is pretty much it on 95% of the shows – he has a knack of covering a lot of material with just one camera. And we love to keep the crew small, low impact, and nimble. This time we also have some spectacular help from Brenda Phillips who came in to film some of the scenes with her Canon 5D, and Dean Cannon joined us for a few days to shoot second camera. When working on “Bears of the Last Frontier”, Dean was out filming Anchorage bears when Joe and I had to be elsewhere. Dean is also a specialist with the ‘Phantom’ which is a super high speed camera that gets mind-blowing slow motion shots (like those slow mo’s of the salmon and the bears charging through the water in “Bears of the Last Frontier”).

Nim Pontecorvo was on location most of the time as sound person. Then of course there is lot’s of help behind the scenes and during editing! Keep your eye out for more of our films this year. I’m working on a brand new BBC bear series with some amazing film makers from the Planet Earth team this year which will be pretty epic. I will keep you all posted on my upcoming special full length film, “Bear Trek” which should be released and in theaters this coming year. You can see a trailer for it here:

2 thoughts on “Notes from the Field”