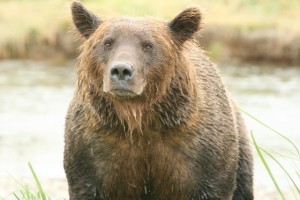 Although sometimes portrayed in the media as voracious predators, grizzly bears are normally reclusive creatures.  Grizzly bears are intelligent, curious, and have excellent memory, particularly regarding where food sources are located.

They have good eyesight and excellent senses of hearing and smell.  Grizzly bears are active during the day and night, but will often alter their habits to avoid humans in areas of high human use.

In the heat of the day, grizzly bears will rest in day beds in dense vegetation, including willows, alders, dense forest, and tall grass. Most grizzly bears spend their time alone except when breeding or raising cubs.

Grizzly bears often live to be around 20 to 25 years of age  Mating occurs from May through July with a peak in mid-June. Female grizzlies begin bearing young at 3 to 8 years of age, and litter size varies from one to four cubs, with an average litter of two. Grizzly bears have a promiscuous mating system: cubs from the same litter can have different fathers. 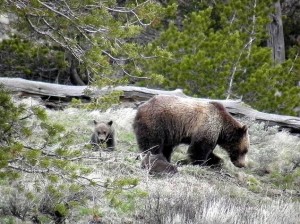 Cubs are born in the den in late January or early February and remain with the female for 2 to 3 years before the mother mates again and produces another litter. Grizzly bears have one of the slowest reproductive rates among terrestrial mammals, due to their late age of first reproduction, small average litter size, and the long interval between litters: it may take a single female 10 years to replace herself in a population.

Female grizzly bear stop breeding in their mid-to late 20s. The typical female may give birth to a maximum of 10 cubs over her lifetime, half of which usually die within a year. Surviving cubs usually remain with the mother for 2 1/2 to 3 1/2 years, during which time the mother will not mate. 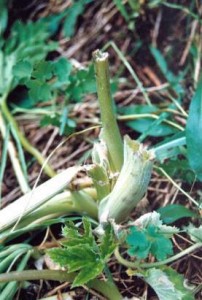 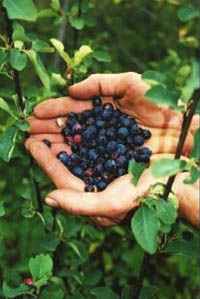 Grizzly bears are opportunistic omnivores. In Washington and Idaho, a typical grizzly bear diet is less than 10% fish or meat, and much of the meat is carrion from winter-killed deer and elk.  In areas where animal matter is less available, grasses, roots, bulbs, tubers, and fungi are important parts of the grizzly diet.

Grizzly bears visit wetlands in the spring for succulent plants that are easy to digest and are high in nutrients.  Summer foods include thistle, cow parsnip, mushrooms, roots, spawning fish, wild berries, and insects (including clusters of adult moths at high-elevations).  Fall foods include berries very important, plants, and ants.

During years when there are shortages of natural food sources, conflicts between humans and grizzly bears are more frequent, resulting in higher numbers of human- caused grizzly bear mortalities due to defense of life or property, and management removals of nuisance bears.

Although adult grizzly bears are normally solitary, home ranges of adults frequently overlap, with young grizzlies establishing home ranges within or overlapping their mother’s. This makes dispersal across landscapes a slow process.

For 3 to 6 months during winter, grizzly bears enter dens and hibernate during periods of low food availability, deep snow, and low air temperature. Grizzly bears in the lower 48 states spend up to 4 to 6 months in dens beginning in October or November.

During hibernation, grizzly bears do not eat, drink, urinate, or defecate. Denning grizzly bears exhibit a marked decline in heart and respiration rate, but only a slight drop in body temperature. Due to their relatively constant body temperature in the den, denning grizzly bears can be easily aroused and have been known to exit dens when disturbed. Both males and females have a tendency to use the same general area year after year but the same exact den site is rarely used twice by an individual.

In preparation for hibernation denning, grizzly bears consume excess amounts of food and the bears may gain more than 3 ½ pounds a day, deposited as fat. The excess fat also serves as energy to the bear upon emergence from the den, when food is still sparse.

A bear’s body language can help reveal its mood. Bears may stand on their hind legs or approach to get a better view, but these actions are not necessarily signs of aggression.  In general, bears show agitation by swaying their heads, huffing, popping their jaws, blowing and snorting, or clacking their teeth. Lowered head and laid-back ears also indicate aggression. 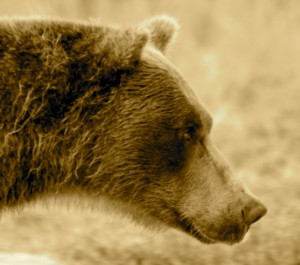 Grizzly bears play an important role in forest ecosystems as seed dispersers and nutrient providers. Berry seeds pass through the bear unbroken and are able to geminate. Not only that, but they come with their own pile of fresh manure as fertilizer.

While foraging for tree roots, plant bulbs, or ground squirrels, bears stir up the soil, increasing species richness and nitrogen availability in alpine ecosystems. Grizzlies increase the amount of available nitrogen through soil disturbance and through salmon carcass dispersal.

Grizzlies also directly regulate prey populations and help prevent ungulate overgrazing.   Studies show that the removal of wolves and grizzly bears in Grand Teton National Park caused populations of their herbivorous prey to increase, which decreased the density of plants in the area.  The decrease of plant density led to a decrease in the population sizes of migratory birds. Grizzly bears, like all carnivores, are keystone predators, having a major influence on their ecosystems.

Find out more about the Grizzly Bear Recovery Area