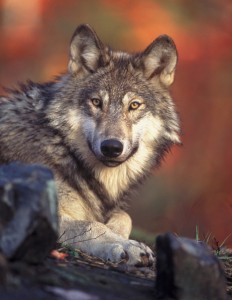 Wolves avoid humans, but encounters sometimes occur when humans and wolves use the same habitat. Wolves that approach people, buildings, livestock, or domestic dogs are either habituated to humans, unhealthy, wolf-dog hybrids, or former captive animals. Wolf-dog hybrids can be especially dangerous because they lack the shyness of wild wolves.

Even though wild wolves rarely threaten human safety, they are wild animals that should be respected and never approached.

Report all suspected wolf and wolf track sightings to the Washington Wolf Reporting Hotline at 888-584-9038.

At your home or ranch:

Never let wolves become comfortable around you or your home, or they may lose their fear of people.

While camping, hiking, and hunting in wolf country: