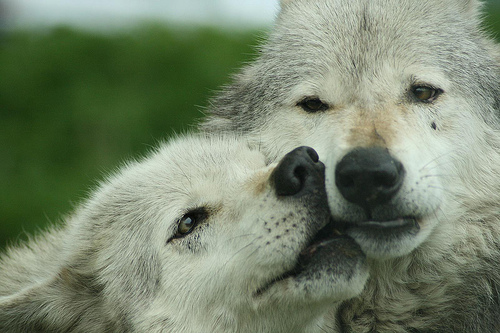 The gray wolf evokes strong emotions throughout its range in North America. Those feelings range from awe and wonder on the one hand, to anger and fear on the other. Millions of dollars have been spent to eradicate wolves, and millions have been spent to reintroduce them. Issues around wolves have divided communities, fueled conservation fundraising efforts, and propelled thousands of people on different sides of the issue into action.

Our complex relationship with the gray wolf dates back thousands of years. Wolves were the first animals domesticated by early humans, providing protection, hunting partnerships, fur and labor. Their ability to survive in a wide range of habitats made them ideal companions as humans spread around the world. Over time, the dog breeds that we are familiar with today were developed by selection of certain wolf traits elimination of others. As the relationship between humans and dogs became more intertwined, the relationship between humans and wolves became more complicated.

Historically, the mythologies of some Native American tribes showed a respect for wolves’ close-knit pack relationships, intelligence and hunting skills. Others regarded the wolf as a sign of illness or death. Once European settlers expanded across the Rocky Mountains, gray wolves were trapped, poisoned and shot, and gray wolf numbers decreased dramatically. By the early 20th century, wolves had nearly been eliminated from their traditional ranges in Washington and Idaho.  Gray wolf populations had been eradicated from Washington State by the late 1930’s.

Wolves are now returning on their own to landscapes in Washington where they have not been seen for over 70 years, and are also expanding their foothold throughout the West. Western Wildlife Outreach is working with communities in Washington and Idaho to prevent conflict between humans and wolves through education. On this website you will find useful information about;

If you live in the North Cascades of Washington or the Selkirk Ecosystem in portions of Washington and Idaho and would like a presentation on the gray wolf, please contact us.