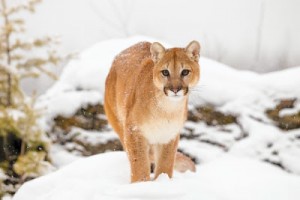 It was that kind of moment, one that left us shocked and stunned into a state of questioning our own sanity. Over almost 40 years of living in our cabin-like little-house on the edge of the Redwood forest in far-north coastal California, we had dismissed occasional accounts of cougar sightings as very possibly “someone had smoked a little too much of something that maybe they shouldn’t have.” We had worked and played in the woods on almost a daily basis without seeing any sign, yet in less than a heartbeat, a cougar had stolen our old housecat, Little Boy, off our front porch one cold January evening–right in front of our eyes–and disappeared into the dark of night so quickly we could do nothing. Flashlight and shotgun in hand, I followed into the night, blasting away at old growth redwood stumps in the backyard to let the big cat know it had crossed the line of our tolerance. I could empathize with challenges of living the life of a predator, but when they preyed on me and mine–I could become a predator, too.

We were sad and angry for a time, but my wife (a Japanese Buddhist) came to view the incident as Karma that had finally caught up with our beloved old house cat for all the little rodents he had dispatched in a similar manner over his 23 year lifetime. We still had two other members of the family, house cats, who needed protection lest the cougar returned to try a repeat performance. Deterring wildlife predators from poaching domestic stock and pets was not a new issue, so I reached out to farmers and ranchers for their knowledge of what measures had proved effective in their experience. One very savvy old rancher recommended we get a mule. “Mules hate cats, and will kick ‘em into next week given half a chance,” says he. Adopting and responsibly caring for a mule had its own complications, so I kept looking. It seemed like most resources agreed on a few measures that were at least helpful:

Learn to think like a predator. They have senses that are exponentially better than ours, and predators will accept your open invitations to dinner without your awareness. When you treat opossums and raccoons to snacks, you are also gathering them up as delectable snacks for the upper end of the food chain. Do the little critters a favor—do NOT make them dependent on you for food.

On various outbuildings we mounted motion-sensor floodlights and also wired an old flea-market radio into their circuits. When a floodlight goes on, so does the radio. We tuned the radio to a strong 24-hour station. Sound doesn’t have to be loud to be effective. We mounted the lights lower than normal to shine more directly into an approaching critter’s eyes. We set the lights to their “TEST” setting, so the lights and the radio come on for 10 seconds, and then go off. The lights and sounds stop critters in their tracks, and makes their night-vision temporarily useless. The moment the animals make another move, another cycle of blinding light and mysterious sound hammers them. Nearby resident critters, such as foxes, will eventually figure out this puzzle, and come up with a “work around” solution, but big cats, and even resident bears who are just passing thru the area, will say “screw it,” and wander on down the trail for easier pickings.