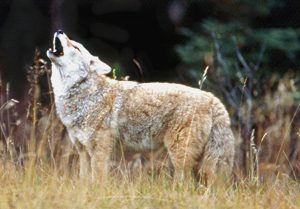 As gray wolves return to the lower 48 States after an absence of 100 years, many champions have rallied to their cause. Except for Minnesota, all gray wolf subspecies were federally listed as endangered in the lower 48 states as long ago as 1978. In the mid-1990’s federal efforts were initiated to restore wolves to Yellowstone National Park and Central Idaho, which became conservation success stories for the National Park Service, U.S. Fish and Wildlife Service, and other federal and state agencies.

During the wolf’s prolonged absence, his smaller cousin, the coyote greatly expanded its range due to the extermination of gray wolves and because coyotes tend to adapt so readily to the presence of humans in both rural and urban settings. According to the IUCN, the coyote, a species listed under the conservation-sensitive category of Least Concern was “believed to have been restricted to the south-west and plains regions of the U.S. and Canada, and northern and central Mexico, prior to European settlement (Moore and Parker 1992).” Today, coyotes have successful populated every state in the US and many Canadian provinces. While the gray wolf is possibly the most studied wild carnivore on the planet, and certainly the most studied canid, the coyote remains largely misunderstood and unappreciated and certainly understudied relative to its numbers.  Yet the coyote is the canid who lives among us.

The wolf,was once universally hated and ultimately extirpated from much of its historic range out of wide-spread fear for human safety and loss of livestock. However, The wolf today, an iconic carnivore of the West, much like the grizzly bear has assumed a symbolic role as an indicator species of wildness and intact ecosystems and draws particular attention to a growing demographic of environmentalists. However, the same audience has not demanded that the same scientific principles of wildlife management be applied to coyotes. Is it time to rebrand their image?  Efforts to rebrand other victimized species of wild canids, like African wild dogs, which, like the coyote, have largely been regarded as vermin, have met with some success.

Although data suggests that coyotes are frequently not the culprits responsible for losses to the companion pet population, the reputation of coyotes precedes them.  A 2009 study by Grubbs and Krausman suggested that coyotes are “cat killers” and unfortunately the media has successfully blown this notion out of proportion to the great detriment of this valuable meso-predator.

Although coyotes are known to take feral cats and house cats permitted out of doors, (bad for cats and native birds alike) the interpretation of the study was a bit shortsighted. Not only was the sample size of radio-collared coyotes in the study, very small, but in close critique it would appear that consuming cats was a learned specialty of certain individuals and it is not a behavior common to coyotes, which are skilled opportunists capable of preying on a vast array of small wild mammals and other vertebrate species.  Hence, it is not the affinity for cats that have drawn coyotes into suburbia, but rather their role as uber-opportunists that make them so adept at living just about anywhere. Although many coyotes occupy home ranges of many square miles and incorporate forest- lands or preserves, other coyotes have been documented to make use of broken patches of habitat intercepted by roads and other human structures. They have proven exceptionally good at finding small openings and corridors, which allow them to navigate around human habitations, rarely detected.

Perhaps its time for more focus to be placed on the ecological services they provide: the ability to control populations of small mammals inside and beyond urban areas, especially at a time when resources of animal control and wildlife agencies are so few and far between and when the poisons in commonly-used rodenticides are coming increasingly under fire for their long-term damage to humans, wildlife, pets and the environment.

Many North American Tribes respected “Coyote” as the great teacher, admired for a great ability to adapt, to live as a generalist, to out-smart humans, to protect and raise pups in the context of a larger family unit, and for tolerance of the proximity of humans. Coyote is a survivor. Coyotes fills an important ecological niche in rural, urban and suburban settings alike and should be recognized for the important role they play in controlling true human pests, like species of rats and mice introduced from Asia and Europe which are especially prolific around and in human-occupied areas and can be vectors for human diseases.

Want to know more about coyotes in suburbia? We recommend the book, Suburban Howls by eminent coyote researcher Dr. Johnathan Way, or Hope Ryden’s classic, God’s Dog.  Also, watch for “Coexisting with Coyote—Tips for Avoiding Conflicts” in an upcoming blog on this page.