Cougars are an important part of our natural heritage. Sleek and graceful, cougars are solitary and secretive animals rarely seen in the wild. With neighborhoods encroaching into wildlife habitat, the number of cougar sightings may increase, but a cougar sighting does not mean that there are more in an area. The cougar’s ability to travel long distances occasionally brings these cats into seemingly inappropriate areas, even places densely settled by humans. Such appearances are almost always brief, with the animal moving along quickly in its search of a suitable permanent home. 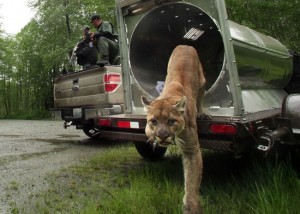 The young cougar in this news article was safely trapped and removed from such a place. “She could be at an age where she’s learning to hunt on her own. Her mother likely ran her off to encourage her to establish her own territory.” Such inexperience gets some cougars into trouble, but in this case good practices in non-lethal wildlife control techniques by state wildlife agents may help assure that this cougar will have no interest in anything human. Karelian Bear Dogs, which work to deter and repel bears, are being used to conduct similar work with cougars. Read the article, look at the photo gallery, and find that even an officer many years in the field can still be deeply moved to appreciate a magnificent young cougar.

Click the link to read the HeraldNet news article: