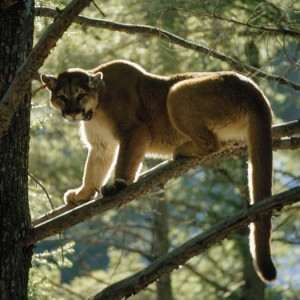 In Washington State, cougars can be found throughout most of the forested areas of the state. The only habitats from which they are absent are on the islands of Puget Sound and in the Columbia basin country.  According to the Washington Department of Fish and Wildlife (WDFW), about 80,000 km2 or roughly 46% of the land area of the state is cougar habitat.

Legal Status of Cougars in Washington

According to the Washington Department of Fish and Wildlife, cougars are classified as game animals and an open season and a hunting license are required to hunt them (WAC 232-12-007). A property owner or the owner’s immediate family, employee, or tenant may kill a cougar on that property if it is damaging domestic animals (RCW 77.36.030). No permit is required.

The killing of a cougar in self-defense, or defense of another, should be reasonable and justified. A person taking such action must have reasonable belief that the cougar poses a threat of serious physical harm, that this harm is imminent, and the action is the only reasonable available means to prevent that harm.

The body of any cougar, whether taken under the direct authority of (RCW 77.36.030), or for the protection of a person, remains the property of the state and must be turned over to the Department of Fish and Wildlife immediately.

The management of cougars in Washington by the Washington Dept of Fish and Wildlife (WDFW) has a long and varied history. The species was classified as a bounty animal from 1935 to 1960 and the state paid money to private citizens for killing these animals. The bounty was rescinded in 1961, at which time cougars were reclassified as a predator. In 1966 cougars were reclassified as a game animal and a regulated hunting season was established. At present, regulated cougar hunting is permitted in all the western states with mountain lion populations except California. 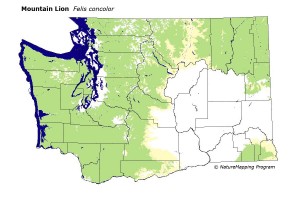 In 1996, Washington voters approved Initiative-655 by a 67% to 33% margin, thereby making it a “gross misdemeanor to take, hunt, or attract black bears with bait, or to hunt bears, cougars, bobcat or lynx with dogs.” The initiative included language that maintained the authority of the WDFW to use hounds if needed to address “problem” cougars.

Anticipating a decline in hunting opportunities and revenue as a result of the hound ban, the Washington Department of Fish and Wildlife increased the number and reduced the cost of cougar hunting tags, increased the bag limit, and extended the duration of the hunting season in the years following.

Some of these changes have been undone in recent years: the bag limit has been reduced to 1 cougar per year and the hunting season has been shortened. For more information regarding these changes go to the WDFW’s website specifying Cougar hunting regulations.

In 2000, the Washington State legislature passed State Senate Bill (SSB) 5001, which allowed WDFW to permit the use of hounds to hunt cougars where there are perceived conflicts between cougars and humans.  In 2009 hound hunting was permitted in Chelan, Okanogan, Ferry, Pend Oreille, Stevens and Klickitat Counties. As of 2011, the use of hounds to hunt cougar is now prohibited statewide.

In 2008, WDFW completed its game management plan to lay out its goals and approaches for managing wildlife in the state through 2015.  WDFW’s statewide goals for cougar are: