Hiking in the North Cascades some time in the late 1990s, I met a momma bear and her cub on the trail. They were extremely beautiful, with the sun shining through their long fur as the wind ruffled it. My response at the time, however, was to say “B-B-B- Baby Bear!” in a tone of deep distress. Then I ran rapidly back down the trail for several miles.

So when I had a chance to talk with Rose Oliver, the Skagit and Whatcom County Field Coordinator for the Grizzly Bear Outreach Project (GBOP), I asked for some pointers, in case I ever meet more bears on the trail.

“Well,” she said diplomatically, “You did do a good job putting distance between the bears and you. Generally, though, backing away slowly is much better than running.”

As their name suggests, the Grizzly Bear Outreach Project knows about bears, and about human-bear interactions. However their work has grown beyond just black bears and grizzly bears to include wolves and cougars. The organization works across the state, focusing primarily on areas where people and other large carnivores overlap. Rose provided more detail about the collective importance of those species.

“We focus on a few species we call ‘keystone species.’ If you think of an ecosystem as shaped like an arch, large predators are the keystone block in the center; they may be small in number, but without that block, the whole structure collapses. The same is true with our ecosystems.”

Specifically in the case of cougars and wolves, it is proven that when they have been removed from an ecosystem, over-browsing by deer and elk can occur, who love to eat tree saplings before they’ve had a chance to mature. However, songbirds, fish, and small mammal communities rely on these trees growing to full maturity. The presence of cougars and wolves creates more biologically diverse plant and animal communities.”

GBOP’s insistence on the importance of science reflects their mission; they’re an educational organization. They spend a lot of time meeting with businesses, individuals, park and forest service staff, as well as tabling at community events. In a region where political tensions characterize a lot of opinion about large carnivores, they describe themselves like this: “We are unique because we meet with community members and listen to their opinions, concerns, and ideas, and we partner with government agencies, non-government organizations, and the public to create wildlife-safe communities.”

Rose lives in Marblemount, not too distant from where the first confirmed North Cascades Grizzly sighting in more than a decade happened last year. Given the potential for urban/ rural divisions of opinion about bears, wolves, and cougars, I was happy to hear that the group’s field staff generally live in communities directly affected by what Rose calls “the human-wildlife interface.”

“We have field staff in Twisp,  Issaquah, and along the Washington-Idaho border,” she explained. “While education is important for everyone, we really focus our work on the areas where these animals and people are sharing territory.

“It’s important to be prepared for an encounter with a bear when you’re in bear country, but it’s also important to dispel some of the common myths and misconceptions people have. For instance, you are more likely to be struck by lightning or killed in a car wreck on the way to a trailhead than attacked by a grizzly bear. All in all, bears are far more likely to enhance your wilderness experience than spoil it.”

As part of their educational efforts, GBOP has created some luggage-tag-style checklists to attach to hiking packs. The tag lists how to respond to encounters with wildlife. You can pick one up, along with lots of other educational materials, at the Community Food Co-op during their Community Shopping Day on May 19. That way, if you meet a bear like I did, you’ll have the correct response close at hand. Creating a critical mass of science-based knowledge about keystone predators is at the heart of GBOP’s mission.

Bears, wolves, and cougars were all more or less extirpated from Washington State by the 1930s as a result of attitudes of the time and government bounties for killing them. So the re-emergence of large predator species and new government protections for them represent a huge cultural shift. Rose and I talked about the five new wolf packs that have naturally returned to Washington, and the recent illegal poaching of some of them.

Despite the conflicts, Rose finished our conversation with some words of appreciation for our unique historical moment. “It’s amazing to live in a time when we can experience eagles returning to our rivers, swans to the fields, and even see wolverines and wolves making Washington their home once again. I’m proud to live in a state wild enough to provide suitable habitat for all of these creatures.” 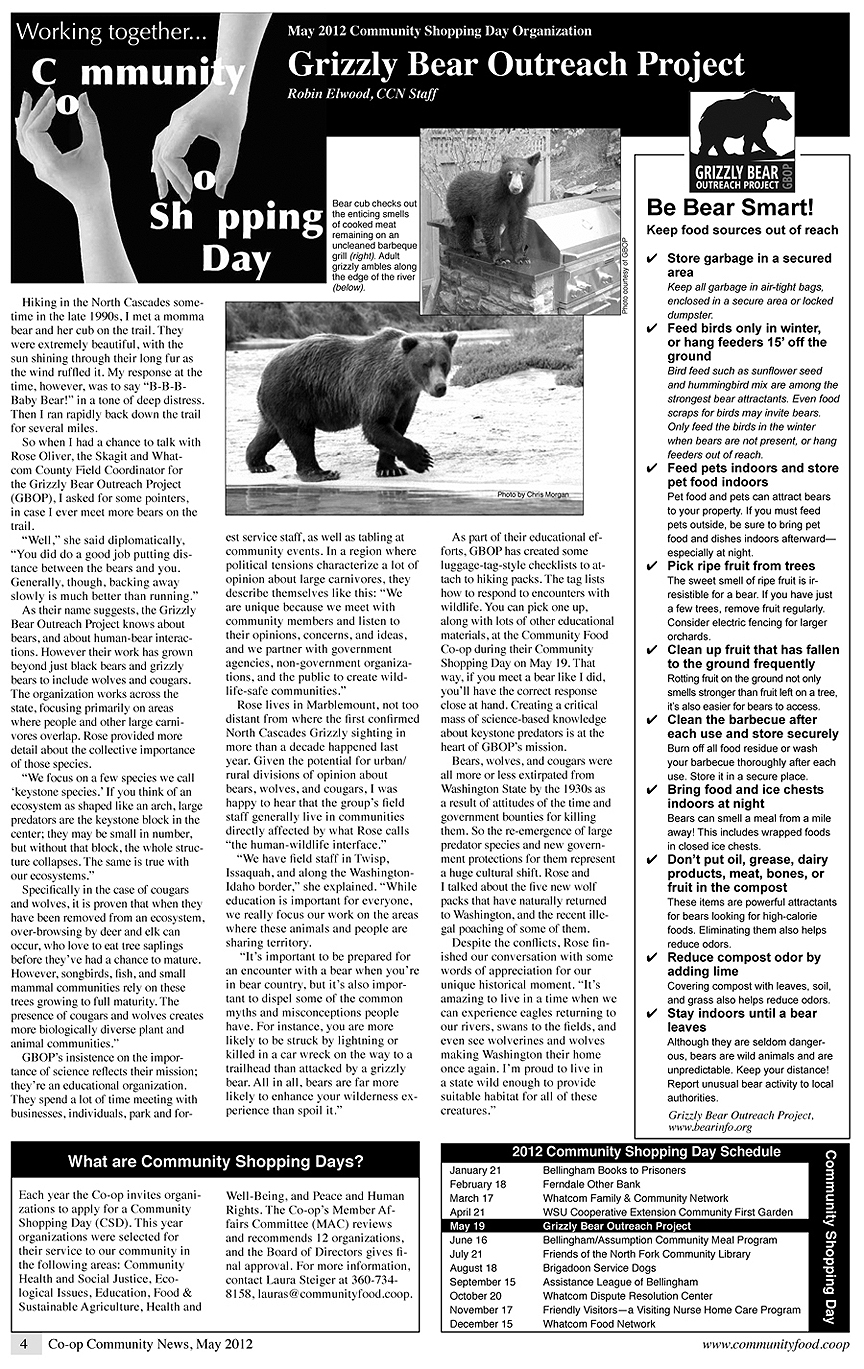 2 thoughts on “An Interview with Rose Oliver, GBOP Field Coordinator”