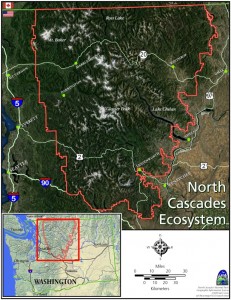 The North Cascades Grizzly Bear Recovery Area is one of the largest contiguous blocks of Federal land remaining in the lower 48 states, encompassing approximately 9, 565 square miles within north central Washington. Stretching from the US-Canada border south to Interstate 90, it includes all of the North Cascades National Park, and most of the Mount Baker-Snoqualmie and Wenatchee-Okanogan National Forests.

Current efforts toward recovery are focusing on habitat protection through a strategy of no net loss of core habitat, information and education efforts regarding grizzly bears and their habitat, and enhanced sanitation for proper garbage and food storage in bear habitat.  Information and education programs must continue to inform people about grizzly bear biology, and techniques to avoid conflicts when living or recreating in bear habitat.  An EIS process is necessary to involve the public in examining a range of alternatives to recover this population, including population augmentation. (Interagency Grizzly Bear Committee)