A happy GBOP audience of kids. But what do adults in the recovery zone think about grizzly bears?

Just what do local rural residents think about bears and the process of recovery (conservation actions that lead to an increased number of bears)?

Much of our work entails understanding people’s perceptions of bears. Having a good knowledge of what local residents think and know about grizzly bears allows us to create the best possible education program that meets real needs on the ground. That’s why we conduct detailed surveys in and adjacent to the North Cascades Grizzly Bear Recovery Zone. Some of the findings may surprise you, including the fact that in one of our telephone surveys of more than 500 people living within the NW recovery zone, 79% supported the recovery of grizzly bears.

508 rural residents within the northwest corner of the recovery zone (Skagit and Whatcom counties) were surveyed. It was conducted by an independent survey company.

Majorities of survey respondents disagreed with the following statements

Statement: Grizzly bears in the North Cascade Mountains should be preserved for future generations.

Statement: Grizzly bears were here before humans and have an inherent right to live in the North Cascade

Statement: Residents and visitors to the North Cascades can prevent almost all problems with grizzly bears by taking a few precautions such as keeping a clean campsite and avoiding areas with heavy bear activity.

Statement: Grizzly bears are a symbol of the American frontier and should be preserved as part of our national heritage.

Five hundred rural residents were interviewed, from the eastern and western sides of the North Cascades. The survey was conducted by Washington Department of Fish and Wildlife. Among many questions, the participants were asked if they supported grizzly bear recovery in the North Cascades: 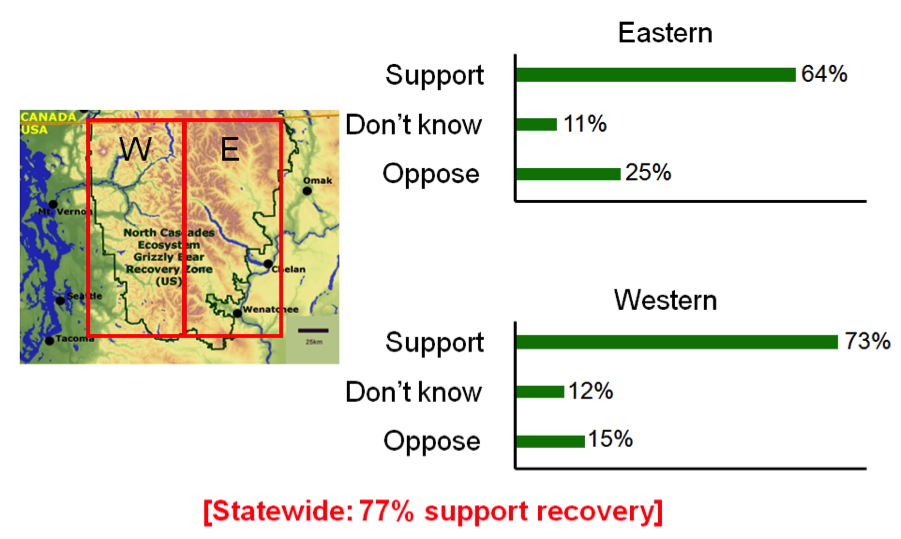 The GBOP Bear Smart Assessment report, January 2005. Includes a summary of people’s attitudes towards bears in the context of Bear Smart (a program to minimize non-natural food attractants in and around communities). Click here for 1200kb pdf