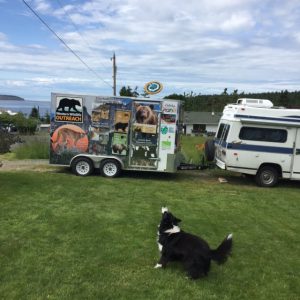 Carnivores: Animals in the taxonomic order “Carnivora”. Main physical traits shared by all terrestrial carnivores include a large brain, large, strong, canine teeth and, in many, strong, prominent claws. On the taxonomic tree,  organisms that belong to the same taxonomic order show even more relatedness if they also share the same family, then genus, then species. Scientists today have the ability to extract and study DNA from particular organisms and determine their genetic relationship or closeness. Domestic dogs and wolves are the same species, we now know. Your dog and wild gray wolves have almost indistinguishable genomes.

So, why do humans love, trust and admire their dogs so much, while fearing and loathing wolves when in fact they are members of the very same species, Canis lupus?

All of us who are dog “owners” know that dogs are highly intelligent and excellent at problem solving and memory-retention. Dogs form firm, loyal bonds with their human families, and are often ready to defend them against any perceived threat. They show affection readily and frequently ask for it from other members of their “pack”. Dogs love to play, with humans and with each other. Dogs also seem to have an uncanny ability to understand human communications, perhaps through a heightened perception of voice tone and inflexion and human emotions. I know that when I speak normal English to my 12-year-old border collie, Tucker, I take it for granted that he understands what I have said. I have come to believe that something almost ”telepathic” is going on, something that goes beyond my dog’s ability to understand my spoken word. Dogs, like their “people,” pay very close attention to facial expression, gestures and vocal tone.

Most dogs are easily trained from puppies to recognize and respect the hierarchy that exists in all families. Puppies, like people children have an innate desire to “please.” This is based on the instinctive knowledge that his/her survival and well-being are tied to social cooperation by obeying and placating the family leaders and sticking to their assigned role in the family hierarchy.  For dogs in a human family, this role should ALWAYS be at the bottom. It’s never a good idea to let your dog be in charge! A dog that challenges authority may do so by biting at something or someone he doesn’t like, or by refusing to obey voice commands. He may engage in fighting with other dogs to show his “top dog” status.  When a dog is allowed to continue to behave in this manner, he may find himself looking for a new home, from behind the wire of a cage at the local animal shelter, unless he is fortunate enough to be part of a family that knows how to rapidly discipline and correct such behavior. All dog owners should know how to discipline correctly. The safety and security of you AND your dog may depend on it.

So where do wolves come in? Those large, wild canines with really big teeth and really big brains? Aren’t they really nothing like our family pets?

Wrong!  Dogs and wild wolves are actually very similar in some important ways. Wolves exhibit the canine traits attributed to domestic dogs as noted above, only within the context of their own family group, or “pack”. Wolves depend on the allegiance of pack members who defer to the alpha, or dominant breeding pair, in any pack. Packs are generally composed of from 3-8 animals or more: the breeding pair, their offspring from previous litters and pups of the year. The breeding pair are the pack leaders. They decide where, when and what the pack will hunt, how the pack members will interact with surrounding packs, and where and when the den sites and rendezvous areas will be located. They decide when the whole pack must relocate for safety reasons or to better find food.

Wolves reaffirm pack unity and the status of each pack member through their behavior, posture, through frequent contact, and through vocal, as well as non-vocal communications. Wolves frequently show affection for each other as a way of maintaining and strengthening pack and family bonds. Pack leaders will also swiftly discipline what they perceive to be defiant behavior in a subordinate pack member. A subservient wolf will roll over on his back to indicate his submissiveness.  (So will your own dog. This isn’t just a sign of wanting a belly rub!) All pack members share in the raising of the pups, in one way or another, and all pack members stand ready to come forward and defend the pups from outside threats. They may engage in “play-fighting” like your dog, or the fights can be very serious when the fights are over dominance in the pack.  In multiple ways, wolves behave very much like our domestic dog companions, only the behavior is centered around preserving the integrity of the pack and its members,  instead of a human/canine  family.

Dogs are wolves. Taxonomists group them as Canis lupus familiaris a sub-species of the world-wide gray wolf, . What we see and admire in our domestic companions may be mirrored in their wild cousins, behaviors and traits passed down through their shared genes from common ancestors.  I don’t mean to suggest that wolves are exactly like dogs and would make good pets. That is certainly not true, and would be a really bad idea. Dogs are wolves that came in from the cold millennia ago, while wild wolves chose to remain wild and to stay apart from humans.

Wolves deserve our respect, and our understanding that they are not just fearsome, mindless, attacking and killing machines. They are large carnivores, capable of exceptionally  complex thinking and problem solving, who must prey on other animals to survive. They will always choose the prey with least risk of injury and the biggest caloric pay-off, so they tend to target the youngest, oldest and least fit of their prey.  This preference is part of “survival of the fittest”, and helps to maintain health and vitality in ungulate herds.  And yes, wolves very occasionally may take advantage of livestock that is not adequately supervised, and we as humans need to be constantly improving our methods of deterring such attacks through better vigilance and better husbandry in order to protect both wolves and livestock from harm.

Wild gray wolves are very people-shy. They are by far the least dangerous of North America’s large carnivores, with four or fewer lethal attacks on humans in our recorded history. They maintain a highly evolved system of ordered societies, where the pack, or family group is of central importance, and where  family relationships matter, even when young adult wolves leave to establish new packs.   Wolf populations are recovering throughout the western United States as well as in Europe. In order for humans to coexist with these large predators, we need to understand them, learn to live with them and respect them rather than fear them blindly. Healthy ecosystems depend on healthy populations of wild carnivores to stay in balance.

Next time you take your dog for a walk off-leash (in a safe place, please!) observe how he engages with his environment. Watch how she uses all his senses, especially the sense of smell, to explore her surroundings. Notice how he still pays attention to where you are, as the pack leader. Observe the way she takes in all this information and processes it, then makes decisions on what to do next, where to go. He will chase a stick (or Frisbee) you throw for him, in imitation of chasing and retrieving prey to “feed” his family – or maybe it’s just pure social play! Appreciate that the behaviors you enjoy and admire in your dog, may be the very traits that he shares with his very similar wild cousins. Dogs and wolves: Canis lupus.