For the first time in more than 30 years, a grizzly bear was captured by wildlife biologists in Washington for radio-collaring and release so that more can be learned about this federally threatened and state endangered species.

On June 29 a young male grizzly bear was captured by a multi-agency team southeast of Sullivan Lake in Pend Oreille County in northeast Washington (Picture 1 attached). The bear was estimated to be five years old and weighed 365 pounds. It was radio collared and released at the site of capture in the Granite Creek drainage. This is only the second capture of a grizzly bear in  Washington with the first occurring in 1985 near Huff Lake in the Selkirk Mountains. AsecondbearwascapturedinBoundaryCreekinIdahoonAugust14. This individual was an adult female accompanied by at least one cub. The bear weighed 245 pounds. Both bears were fitted with GPS radio collars and are being monitored.

Five grizzly bears (2 females and 3 males) were captured in the Creston Valley (B.C. Canada) by Dr. Michael Proctor in cooperation with the BC Conservation Officer Service from June through August of 2016. All of these animals were captured in the valley floor with the goal to determine how bears are using these lowland habitats. Another adult female was captured and radio collared about 10 miles northeast of Castlegar along the Kootenay River and released to the east in the Selkirk Mountains.

We began 2016 monitoring 4 grizzly bears in the U.S. and 8 bears in BC. Several bears have lost collars and trapping has replaced most of them such that we are now monitoring 4 bears in the U.S. and 9 bears in BC. Current collared bears include 2 females and 2 males  in theU.S.and 6 females and 3 males in BC. One collared female in theU.S.is accompanied by two yearlings. One of the radio collared males is a young male bear that was originally captured in the Yaak near the Idaho-Montana border and moved west across the Kootenai River during early September of 2015. He denned in the Selkirk Mountains during the winter of 2015-16. This is the second young male we have radio tracked moving from the Yaak area into the Selkirk Mountains just south of the international boundary. The first occurred in 2006 by another young male that was captured north of the international border, but moved from the Yaak to the Selkirk Mountains before losing his radio collar in the Mill Creek drainage of Washington.

One young male grizzly was struck by a train and killed on 27 August south of the Kootenai National Wildlife Refuge. No bears are known to have died thus far in 2016 in the Cabinet-Yaak.

We are continuing to perform monthly check of rub trees in all study areas and place trail cameras at corrals to snag hair for genetic analysis (Pictures5-7attached). Corralsareleftfor 3-4 weeks before hair collection and removal. Corrals are equipped with a trail camera to record the presence of bears or other species. If bears do not leave hair wes till have a picture of the animals involved and this is particularly useful for identifying females with young. During 2015 we checked over 600 rub trees in the Cabinet-Yaak. We are establishing more rubs in the Selkirk Mountains that will be checked on a monthly basis plus corrals with trail cameras that provide hair samples for genetic analysis.

Our genetic samples from 2015 are still being analyzed by the genetics laboratory. When complete we will finalize our 2015 monitoring reports for both these recovery areas.

We annually sample several permanent berry production sites across the Cabinet-Yaak recovery area and more recently in the Selkirk Mountains. Our species of interest is mainly huckleberry, but we also sample serviceberry, buffaloberry, and mountain ash. We have conducted these annual measurements since 1989 in the Cabinet-Yaak and for the past 3 years in the Selkirk Mountains. Our 2016 sampling suggests the huckleberry crop was best described as“spotty”.

These capture efforts and hair snagging are part of a research and monitoring effort including cooperators and funders from Birchdale Ecological (M. Proctor), British Columbia Conservation Officer Service, Colville National Forest, Idaho Department of Lands, Idaho Fish and Game, Idaho Panhandle National Forest, Kalispel Tribe, Kootenai Tribe of Idaho, Montana Fish, Wildlife, and Parks, Kootenai National Forest, and Washington Department of Fish and Wildlife. The effort is led by the U.S.Fish and Wildlife Service through the Grizzly Bear Recovery Office but also supported by funding from the Idaho and Washington state offices of the U.S. Fish and Wildlife Service. We also thank numerous private owners of timber lands that have granted access to their property for this research effort including: Caribou Mountain Lodge, Hancock Forest Management, Molpus Woodlands, Plum Creek Timber, and Stimson Lumber.

Picture 1. Grizzly bear male 1002 being measured and fitted with a radio collar in the Washington Selkirk Mountains. Biologists Tyler Vent and Alex Welander (left to right) 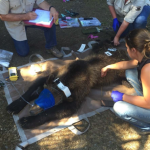 Grizzly bear at a rub tree in the Selkirk Mountains 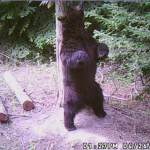 Grizzly bear female with cub at a hair snag corral in the Selkirk Mountains. 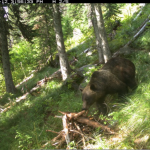