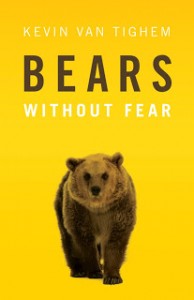 We fear bears, bears fear us and fear leads to conflict. Bears ultimately suffer.
My biggest fear regarding bears is that we won’t give them the respect and space enough they need and deserve to survive into the future. Bears are neither the mystical beasts nor the dangerous vicious killers we sometimes make them out to be; they are bears. The more we get to know and understand them the less we fear them and the better we can all get along.
Kevin Van Tighem of Canmore, Alberta, knows bears and (considering all the time he’s spent around bears since he was a child in the early 1960s) it’s probably safe to assume a few bears know him. A naturalist, hiker, hunter, fisherman and biologist who recently retired as the superintendent of Canada’s Banff National Park, Van Tighem has combined his extensive knowledge and experience with research and fine writing to produce a wonderful, informative book called Bears Without Fear (Rocky Mountain Books, 2013).
“They haunt the edges of the forests of our imagination,” Van Tighem writes. “Since the dawn of time, humans and bears have lived uneasily together. . . There was a time when humans had little defense against bears. Now, in most cases, bears have no defense against us.”
With human populations and development continuing to expand, and critical bear habitat shrinking, how can we ensure wild bears always grace our planet?  “Bears and humans can share our increasingly crowded world safely,” Van Tighem writes. “But for that to happen, we need to learn to respect bears for what they really are, and to see that the choices we make almost always affect bears and other wildlife.”
Through facts, stories and photos Van Tighem’s book helps us better understand bears and how to live with them. Sections include the history of bears in human cultures, myths about bears, and the natural history and habitats of black bears, grizzlies and polar bears.  A section about bear research includes studies on how to reduce human-bear conflicts, and the book concludes with lists of places to see bears and tips for keeping ourselves and bears safe while in bear country.
“While it remains true that bears are capable of attacking and killing people, it remains no less true that they almost always chose not to,”  Van Tighem writes. “The most dangerous thing about a bear is not its claws, teeth or disposition; it’s how we react to it.”
When we destroy their habitat, cause unnatural mortality, or they perceive us as an imminent threat to their young or their food, Bears don’t have a lot of choice as to how they react.
We do.
“Past human choices have brought us to a time when almost every bear species in the world is under threat,” writes Van Tighem. “The choices we make tomorrow – about resource development, roads, agriculture and tourism, as well about our own personal behavior in bear country – will determine the future of the dwindling bear populations that survive today.”
Bears Without Fear is packed with knowledge to help us better understand bears; let’s hope it helps us all make better choices.
You can find more of David’s posts on nature at http://thoughtsfromthewildside.blogspot.com

2 thoughts on “Bears Without Fear: A Book Review”